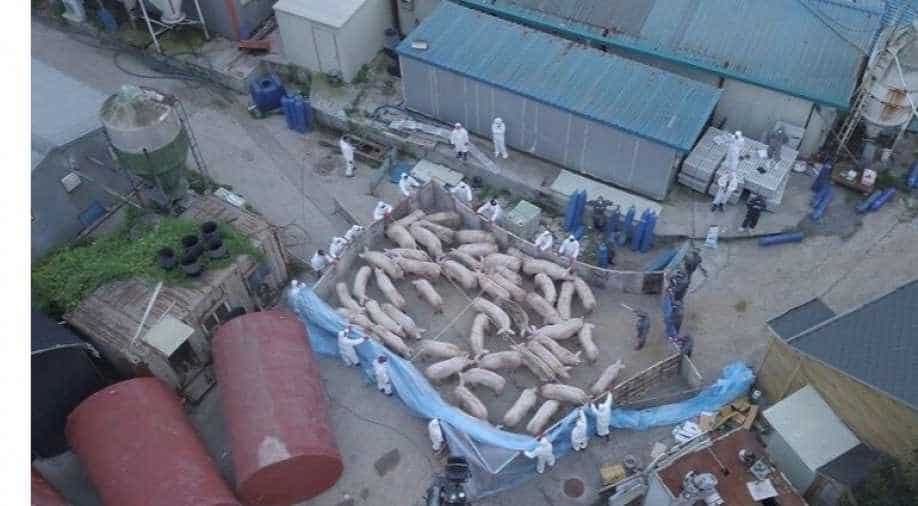 An aerial photo shows workers wearing protective suits and driving pigs to kill at a farm where pigs were confirmed to have been infected with African swine fever in Paju, a city near the inter-Korean border, on September 17, 2019. South Korea on September 17 reported its first cases of African swine fever, becoming the latest country hit by the disease that has killed pigs from China to North Korea, pushing up pork prices worldwide. Photograph:( AFP )

There is no antidote or vaccine and the only known way to prevent the disease from spreading is the mass culling of affected livestock.

South Korea has confirmed its fourth case of African Swine Fever on Tuesday, as Pyongyang was yet to respond to Seoul's request to make joint efforts to tackle the deadly animal disease.

The latest case was confirmed at a farm in Paju, a city near the inter-Korean border where the nation's first case was recorded, according to Seoul's agriculture ministry.

South Korea has culled around 15,000 pigs since the first case was reported on Sept 17.

"We have carried out an immediate culling and are proceeding with an epidemiological investigation," the ministry said in a statement, adding that some 2,300 pigs were being raised at the affected farm.

The fourth case came a day after Seoul's Unification Ministry said that last week it sent a request to North Korea to make collaborative efforts on the matter, although it is yet to receive a reply from Pyongyang.

The virus is not harmful to humans but cases of haemorrhagic fever in pigs is almost always fatal. There is no antidote or vaccine and the only known way to prevent the disease from spreading is the mass culling of affected livestock.

The second and third cases in the South - confirmed on Sept 18 and 23, respectively -- were also reported from cities in Gyeonggi Province, where Paju belongs and is adjacent to the inter-Korean border.

While Seoul authorities have never confirmed whether the outbreak stemmed from the North, Pyongyang in late May told the World Organisation for Animal Health that dozens of pigs had died from the disease at a farm near the Chinese border.

In June, Seoul said the disease was "highly likely" to enter the country from the North and ordered fences to be erected at farms along the border to prevent possible contact between pigs and wild boar.

Kim Jun-young, a vet and a Vice-President of the Korean Veterinary Medical Association in the South, said it is possible that the outbreak has spread to all provinces in the isolated North.

"North Korea does not have enough disinfectants, and (it is likely that) pigs are simply being buried after being culled," Kim said.

"It's possible that the virus has already been spread to all regions of the North if anyone dug the bodies of dead pigs and sold the meat, or... vultures ate them and spread the virus", he added.

There are around 6,700 pig farms across South Korea and pig farming accounts for 40 per cent of the total livestock industry.

Seoul believes Pyongyang raises some 2.6 million pigs across 14 state-run farms. The outbreak could worsen food shortages in the impoverished North, where, according to the World Food Programme, its output last year hit the lowest level since 2008.

In May, the UN's Food and Agricultural Organization said pork prices had risen by up to 50 per cent both in China and on the Chicago futures exchange as a result of the outbreak.

Last month, it said almost five million pigs in Asia had died or been culled because of the spread of the disease.