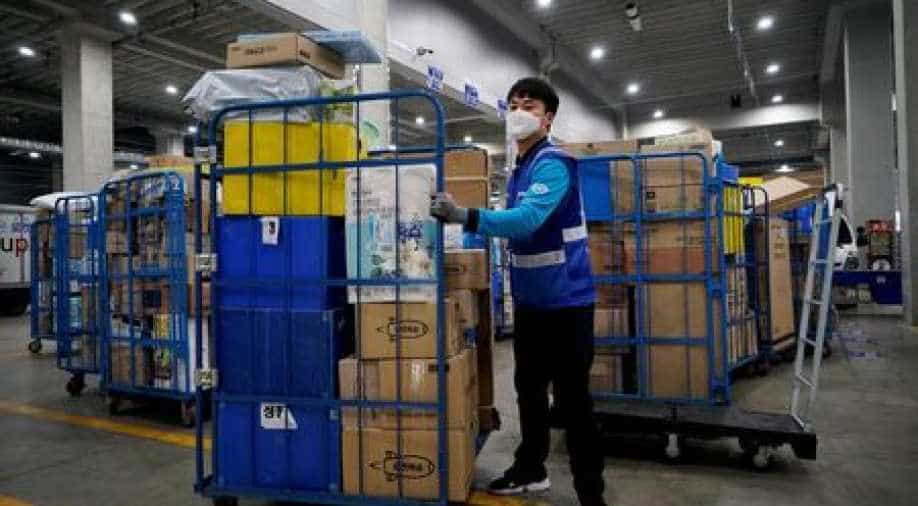 File picture of a delivery man for Coupang wearing a mask to prevent contracting the coronavirus, loading packages before leaving to deliver them in Incheon, South Korea Photograph:( Reuters )

At least 36 cases have been linked to an outbreak at the logistics centre operated by SoftBank-backed e-commerce firm Coupang in Bucheon, west of Seoul.

South Korea reported 40 new coronavirus cases on Wednesday, marking the biggest daily spike in 49 days as millions of children go back to school and authorities fight to contain an outbreak stemming from a stretched e-commerce warehouse.

The Korea Centers for Disease Control and Prevention (KCDC) reported 40 new cases as of midnight on Tuesday, bringing the country's total number to 11,265. A day earlier the country recorded 19 new cases.

So far, at least 36 cases have been linked to an outbreak at the logistics centre operated by SoftBank-backed e-commerce firm Coupang in Bucheon, west of Seoul, the KCDC said. It was not immediately clear how many of the cases were reported in the last 24 hours.

About 3,600 people at the facility are being tested. The company said it closed the centre on Monday and began the strongest disinfection measures recommended by authorities.

Coupang benefited from the contactless trend driven by COVID-19 in South Korea, with orders surging for groceries and other products. The logistics centre opened in early March and is in charge of deliveries to western Seoul, a spokeswoman said.

The first case related to the centre was diagnosed on Saturday, and is suspected to be connected with a Seoul nightclub outbreak earlier this month.