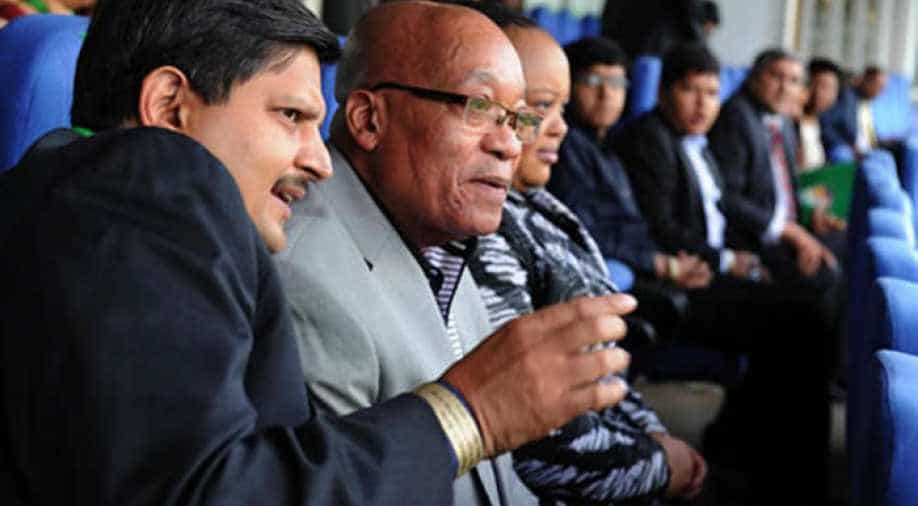 Jacob Zuma with one of the Gupta brothers Photograph:( India.com )

To facilitate a speedy trial in this matter, the accused will be handed a final indictment together with the contents of the case docket on June 15, 2021

From there, the funds were diverted to Islandsite Investments 180 (Pty) Ltd (Islandsite), a company owned and controlled by the Gupta family, it added.

In the charge sheet handed in at court today, the state alleges that Iqbal Sharma and former Free State head of Department for Rural Development (FSDoRD), Peter Thabethe, former head of FSDoA, Limakatso Moorosi, and former FSDoA Chief Financial Officer, Seipati Dhlamini, colluded to divert funds earmarked for rural development in the Free State. These funds were then placed at the disposal of the Gupta family.

The R24m was purportedly paid to Nulane to conduct a feasibility study for the Free State Province’s flagship Mohoma Mobung project, on the basis that Nulane had unique skills to perform the work.

Nulane Investments, however, had no employees on its books and in fact subcontracted Deloitte Ltd to produce the report, for which Deloitte was paid R1.5 million. The only change made to the Deloitte report was to identify Paras Dairy as a suitable implementing partner for the development of a milk processing plant in Vrede.

The accused face charges of fraud and money laundering. The former government officials are also charged with contravention of the Public Finance Management Act.

The fifth suspect in the matter, Iqbal Sharma’s brother-in-law and a representative of Nulane Investments, Dinesh Patel, will formally appear on June 15, 2021 for health reasons.

They are charged together with three companies, Nulane Investment 204 (Pty) Ltd (owned and controlled by Sharma), Wone Management (PTY) LTD, Pragat Investment (Pty) LTD, Islandsite Investments Pty Ltd. The balance of accused listed in the charge sheet is not currently in South Africa.

"The modus operandi used in this case appears to have been replicated in other government departments and projects. It is, therefore, critical that the evidence gathered in this matter is presented to court and a verdict obtained expeditiously. It is for this reason that prosecutors have decided to proceed separately against the accused currently in the country and those abroad, as the process of arrest and extradition may unduly delay the trial," Cronje said.

To facilitate a speedy trial in this matter, the accused will be handed a final indictment together with the contents of the case docket on June 15 2021, when the matter will be postponed to the High Court for the accused to plead to the charges, the NPA said.