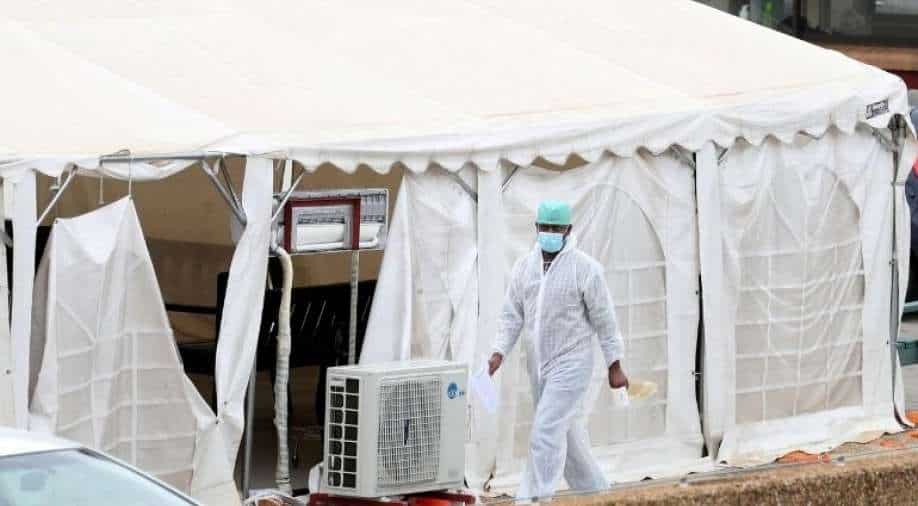 A health worker walks past tents erected at the parking lot of the Steve Biko Academic Hospital, amid a nationwide coronavirus disease (COVID-19) lockdown, in Pretoria, South Africa Photograph:( Reuters )

South Africa has been witnessing a continuous decline in new Covid-19 cases for the past one week, according to the latest statistics from the Department of Health.

“We can look at a seven-day average and it has been on a sustained decline for the past week. So it’s not a guess but pretty clear,” Ridhwaan Sulimaan, a senior researcher at Council For Scientific and Industrial Research said.

Asked if the country has already seen its second wave peak, Suliman said, “When we refer to a peak we refer to cases reaching a maximum. Based on that, yes we have reached a second peak,

Department of Health, Minister, Zweli Mkhize said that the second wave was being brought under control. He attributed this to continuous mask-wearing, social distancing and washing hands.

“When we look at our records at this point, we can see that we are, possibly, beginning to see an inflexion of the curve and we are also seeing that the numbers [of infections] may be starting to decline. But it is too early to celebrate,” Minister said while addressing the media today.

Yesterday [Sunday] we noted a 23 per cent decrease in new cases nationally compared to seven days prior, he said.

However, he said that the health-care system continues to experience significant strain and urged South Africans to continue wearing masks, social distance and wash hands regularly