Something might be gained out of Macron’s meeting with Ukraine: Expert to WION 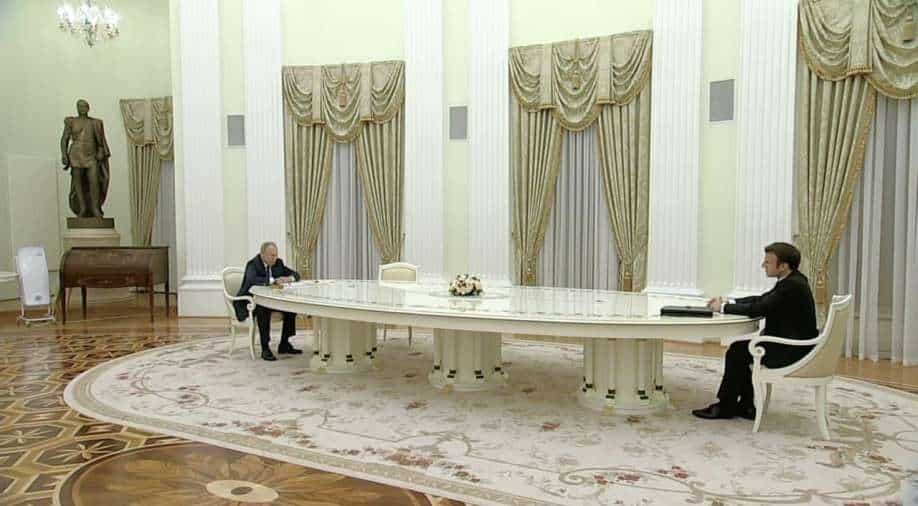 Macron and Putin's meeting in Moscow lasted for hours aimed at fending off a Russian attack on Ukraine. Photograph:( Twitter )

With more than 100,000 Russian troops amassed near the Ukraine borders, there have been claims of the Russian invasion

French President Emanuel Macron has embarked on his shuttle diplomacy in an attempt to broker a peace deal between Russia and Ukraine as a threat of war looms large in eastern Europe.

After holding a marathon talk with Russian President Vladimir Putin in Moscow, Macron arrived in Kyiv to meet with Ukrainian President Volodymyr Zelenskyy.

With more than 100,000 Russian troops amassed near the Ukraine borders, there have been claims of the Russian invasion.

After meeting Putin, Macron claimed that he received assurances from Kremlin that they would reduce escalations against Ukraine—which Moscow has denied.

Even though conflicting views were aired, Dr Vera Michlin-Shapir, a visiting research fellow at King’s College London, claims that there might be something to gain out of the talks.

Michlin-Shapir had previously worked at Israel’s National Security Council and in the Prime Minister’s Office. She is an expert on Russia-Israel-Ukraine relations.

Michlin-Shapir: We are still in the midst of the process, obviously there will be conflicting messages, as each actor (state) wants to position. At the end of the day what matters is what comes out of Kremlin.

It seems that they have something to gain out of the talks being pivoted by President Macron.

WION: The Ukrainian FM has indicated that there is a deep cooperation between Israel and Ukraine, and that Ukraine is interested in helping with air defences from Israel. Now Israel, like many countries, has relations with Ukraine and Russia...but it’s also in a tricky situation because of the large Jewish communities in both countries…Do you think Israel will share, perhaps its Iron Dome technology, to help Ukraine defend itself from any missile attack?

Michlin-Shapir: In this kind of relationship (i.e. Israel-Ukraine and Israel-Russia) one of the things not being mentioned is the relationship Israel has with the US. And in many ways, it decides Israel's direction. Now, Israel also has Russia at its Northern flank with Syria, with whom it has a very strategic relationship.

Now, Russia has bilateral relations with Syria and is also eager to help Israel with its security. Israel has communities in Russia and also in Ukraine.

In sensitive issues like sharing its advanced weapons systems, Israel works in coordination with the US.

WION: Israeli Foreign Minister, Yair Lapid, has reportedly been speaking with both Ukraine and Russia. Last week he said that he does not believe there will soon be a violent conflict between the two countries. What’s your assessment?

Michlin-Shapir: In both Russia and Ukraine, you can see a diminished sense of conflict. The imminence of conflict is actually coming from the US.

Their intelligence community is assessing the conflict to be imminent, which is different from what we are hearing from Ukraine and Russia.

The US intelligence is apparently basing its assessment on what's happening at the border. And what is being observed at the borders is amassing of troops.

WION: Are there any meeting grounds between Russia and Ukraine, with Moscow underlining the Minsk agreement & Ukraine consenting as well? Or there are sticking points within still?

Michlin-Shapir: One of the biggest sticking points is that both sides may have something to gain.

The cost to Russia is lesser as it's richer, bigger and stronger. For Ukraine, it would be devastating, similar to the one they underwent eight years ago, when Crimea was annexed in 2014.

Now, Macron is trying to create a common ground, since there is nothing to gain out of the conflict.  And this is what makes it so difficult to reach an agreement

So, maybe a lack of political will at this point can be blamed.