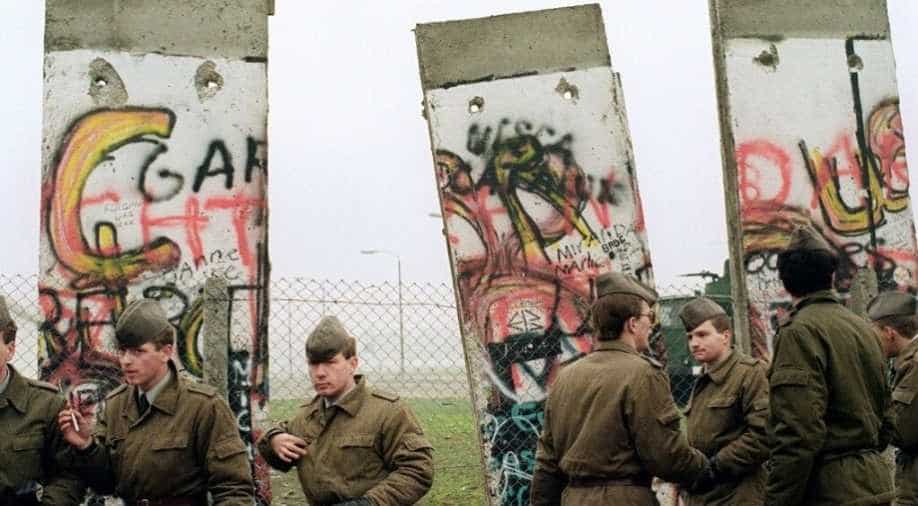 East German border guards demolishing a section of the Berlin wall in order to open a new crossing point between East and West Berlin. Photograph:( AFP )

Germany marks three decades since the fall of the Berlin Wall this week, but a hint of a return of the Cold War and the rise of nationalism is dampening the mood.

Gone, too, is the euphoric optimism for liberal democracy and freedom that characterised the momentous event on November 9, 1989, as Germany grapples with a surge in far-right support in its former communist states.

"The spirit of optimism" that we saw 30 years ago, or even five or 10 years ago, "is not perceivable" today, said Berlin's culture senator Klaus Lederer, whose office took the lead in putting together the capital's festivities for the week.

The mood is therefore "reflective, but we are celebrating", he said. "We are looking back at history together, and we are also talking about the future."

As a sign of the tense times, Germany will put on a sober political programme to mark the epochal event that led to reunification and brought down the Iron Curtain dividing a communist East from a capitalist West.

Foreign Minister Heiko Maas said the anniversary was a chance to remind Europe why it needs to stay united in the face of rising geopolitical tensions around the world.

"Exhortations from individual European capitals fall on deaf ears in Moscow, Beijing and, unfortunately, to an increasing extent also in Washington, DC," he wrote in an op-ed carried in newspapers across the EU on Saturday.

"It is only Europe's voice that carries decisive weight. This is why unilateral action at the national level must finally be taboo in Europe."

While the spotlight five years ago was on world leaders from Barack Obama to Mikhail Gorbachev, this time round, the central focus is on Europe itself.

EU chief Ursula von der Leyen will set the tone with a speech on the eve of the anniversary at an event attended also by Chancellor Angela Merkel.

On November 9 itself, only central European presidents will headline the official ceremonies.

Merkel and President Frank-Walter Steinmeier will be joined by his Polish, Czech, Slovak and Hungarian counterparts, in town to mark "the contribution of the central European countries to the peaceful revolution" that led to the collapse of the communist regime.

Merkel will speak at the Chapel of Reconciliation, which stands on the former Berlin Wall border strip.

Steinmeier, the moral arbiter of the country, will also make a speech at the Brandenburg Gate on the anniversary evening, before a series of concerts including by the prestigious Berlin Philharmonic Orchestra.

And US Secretary of State Mike Pompeo, who was stationed in Germany as a young soldier in 1989, will be in visiting from Wednesday but leave on the eve of the anniversary.

He meets Merkel and members of her cabinet on Friday, in meetings set to underline the growing divisions across the globe.

In a statement announcing his visit, Pompeo's office said talks with his counterpart Maas will "discuss the importance of our Transatlantic partnership and the need for strengthened engagement in the face of growing threats from Russia, China, and Iran."

'Cold war is back'

While the fall of the Iron Curtain that divided post-war Europe had led to hopes of a liberal democratic era and arms dismantlement three decades ago, the mood has soured today.

Within the EU, cracks have appeared as former eastern bloc countries like Hungary or Poland are accused by Brussels of challenging the rule of law.

On a broader arena, Trump's go-it-alone stance on rejecting world treaties including on climate change and a nuclear disarmament deal with Iran has deeply shaken long-time allies in Europe.

Russia, meanwhile, is consolidating its foothold in the Middle East, while the US is also increasingly at odds with China.

For UN chief Antonio Guterres, "the Cold War is back -- with a vengeance, but with a difference. The mechanisms and the safeguards to manage the risks of escalation that existed in the past no longer seem to be present."

Gorbachev, who chose to stand aside instead of stopping the Wall from falling 30 years back, was also more pessimistic today.

Writing in his latest book, Gorbachev warned: "International politics is on an extremely dangerous trajectory... military operations currently have the characteristics of a real war."