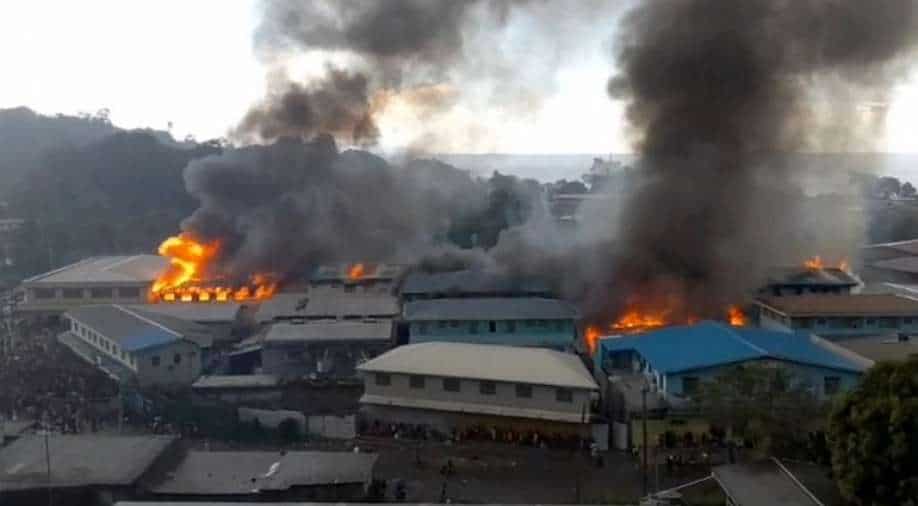 Protests rocked the capital of the Solomon Islands on Thursday Photograph:( Twitter )

Experts say discontent has simmered for decades between the two islands, mainly over a perceived unequal distribution of resources and a lack of economic support that has left Malaita one of the least-developed provinces in the island nation

Protests rocked the capital of the Solomon Islands on Thursday for the second straight day as rioters clashed with the police, set buildings on fire, looted properties and demanded that Prime Minister Manasseh Sogavare resign.

Here’s what we know about the protesters’ grievances.

Who and what are behind the protests?

Many of the protesters traveled from the island of Malaita to Guadalcanal Island, which houses the nation’s capital, according to officials and local news reports.

Experts say discontent has simmered for decades between the two islands, mainly over a perceived unequal distribution of resources and a lack of economic support that has left Malaita one of the least-developed provinces in the island nation.

There has also been lingering dissatisfaction in Malaita over the central government’s decision in 2019 to switch diplomatic allegiances to China from Taiwan, a self-governing island that China claims as its territory.

Taiwan’s Ministry of Foreign Affairs accused Beijing of bribing Solomons politicians to abandon Taipei in the run-up to the 70th anniversary of the founding of the People’s Republic of China under the Communist Party.

How did the Solomon Islands become the focus of world powers?

The Solomon Islands is an archipelago made up of nearly a thousand islands in the Pacific, about 1,000 miles northeast of Australia. The island chain has a population of just 650,000, primarily farmers and fishers.

Malaita is the most populous of the islands, with a population of 160,500 as of last year. Densely forested, mountainous and volcanic, it lies 30 miles northeast of Guadalcanal, the larger island, across Indispensable Strait.

The island nation found itself in a heightened geopolitical tug of war because of the 2019 decision, which dealt a blow both to Taipei’s global standing and to Washington’s regional diplomacy.

The United States sees the Solomon Islands, and other Pacific nations, as crucial in preventing China from asserting influence in the region.

China has been investing heavily in the Pacific, to the alarm of U.S. officials. In 2019, a Chinese company signed an agreement to lease one of the islands, but the agreement was subsequently ruled illegal by the attorney general of the Solomon Islands.

How did the switch in allegiances affect the country?

Some experts draw a straight line from the 2019 decision to this week’s unrest.

Behind the riots was “quite a lot of unhappiness about that switch,” said Sinclair Dinnen, an associate professor at the Australian National University’s Department of Pacific Affairs.

Malaita’s premier, Daniel Suidani, has been a vocal critic of that decision by the prime minister, and Malaita continues to maintain a relationship with and receive support from Taiwan — in contravention to the central government’s position, said Mihai Sora, a research fellow at the Lowy Institute and a former Australian diplomat to the Solomon Islands.

With the United States providing Malaita with direct foreign aid while China supports the central government, existing fractures in the nation have deepened, he said.

“Geostrategic competition does not by itself trigger rioting,” Sora said, “but it’s the actions of these large nations as they curry sympathy with local actors — favoring some over others to pursue their own strategic objectives without pausing to consider what are already deep social and political undercurrents in the country — that have a destabilizing effect on social cohesion.”

What has been the fallout from the riots?

After hundreds of people took to the streets and set fire to a building near Parliament, Sogavare announced a three-day curfew: from 7 p.m. Wednesday to 7 a.m. Friday.

He accused the protesters of being politically motivated, saying in a video address, “Today our nation witnessed another sad and unfortunate event aimed at bringing a democratically elected government down.”

Sogavare also vowed that the authorities would find the protest’s organizers and bring them to justice.

The Chinese Embassy in Honiara called on the authorities to protect Chinese residents, according to a statement posted on social media.

The embassy said it had “asked the Solomon Islands to take all necessary measures to strengthen the protection of Chinese enterprises and personnel.”

It also advised Chinese residents in “high-risk areas” to shut their businesses and hire security guards.

How could this end?

Sora, the former Australian diplomat, said that in a country where civil unrest is not unusual, it appeared that the police had responded “quite ably.” He said he had not yet seen any indications that the government would not be able to retain control.

On Tuesday, before the protests started but as Malaitians had started to converge on the capital, a group of federal Malaitan members of Parliament called on Suidani and protest leaders to “refrain from inciting Malaitans to engage in unlawful activities.”

They also urged opposition parliamentarians to “refrain from fanning the flames of violence and incitement.”

But by Thursday, 16 buildings were on fire or had been burned down in Chinatown, according to Nathan Ruser, a researcher at the Australian Strategic Policy Institute. He arrived at the number by cross-referencing on-the-ground videos and photos with maps of the area.

Other individuals and groups latched on to the protest for various reasons, Dinnen said.

Machinations by the political opposition to unseat the government, and opportunistic rioters, contributed to the size of the crowds, he said.