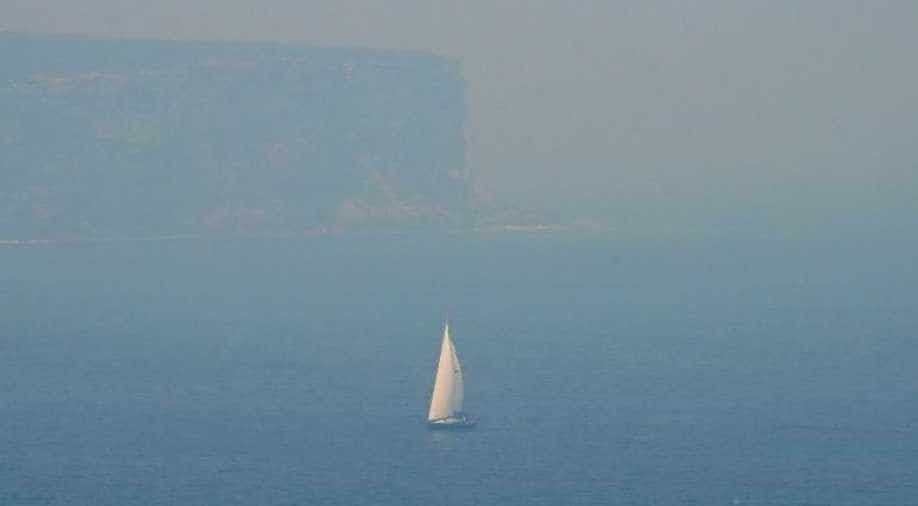 A sailing boat is seen through smoke haze from bushfires in front of the cliffs of North Head, Sydney Harbour, Australia, December 5, 2019. Photograph:( Reuters )

Australia is experiencing a horrific start to its fire season, which scientists say began earlier and is more extreme this year due to a prolonged drought and the effects of climate change.

Smoke haze from bushfires raging in Australia spread to the capital Sunday, as firefighters raced to contain more than 140 blazes ahead of a heatwave forecast early this week.

Australia is experiencing a horrific start to its fire season, which scientists say began earlier and is more extreme this year due to a prolonged drought and the effects of climate change.

Residents of Canberra in the country's southeast woke up to see the capital shrouded in haze Sunday, joining those in Sydney who have endured weeks of toxic air pollution caused by bushfire smoke.

Officials said favourable weather conditions had given them a chance to bring several blazes under control before the forecast return of strong winds and high temperatures Tuesday.

Among those is a "mega-fire" burning across 250,000 hectares within an hour's drive of Sydney, Australia's largest city, where ash from the fires has occasionally fallen.

Firefighters are now bracing for Tuesday when temperatures are expected to reach above 40 Celsius in parts of New South Wales state -- worst-hit by the bushfires -- and gusting westerly winds are likely to fan the flames.

"Today (fire) crews will be doing what they can to consolidate and strengthen containment lines, which in some areas will include backburning," NSW Rural Fire Service spokesman Greg Allan told AFP.

But the state's Bureau of Meteorology warned that the massive fires are "in some cases just too big to put out at the moment".

"They're pumping out vast amounts of smoke which is filling the air, turning the sky orange & even appearing like significant rain on our radars," the department tweeted.

Nearly 50 reinforcements from the United States and Canada have been flown in to support fatigued firefighters in recent days, with the international contingent tasked with providing logistical assistance.

In neighbouring Queensland, the focus was also on managing fatigue among frontline firefighters -- who in both states are almost all volunteers -- as the weather there provided a brief reprieve from weeks of battling blazes.

"We're just looking to wind down and recover and prepare for the next round, whenever that maybe," a Queensland Fire and Emergency Service spokesman told AFP.

Since the crisis began in September, six people have been killed, more than 700 homes destroyed and an estimated two million hectares (almost five million acres) scorched.

Though the human toll has been far lower than the deadliest fire season in 2009 -- when almost 200 people died -- the scale of this year's devastation has been widely described as unprecedented, as Australians grapple with the impacts of a changing climate.

Official data shows 2019 is on track to be one of the hottest and driest years on record in Australia.