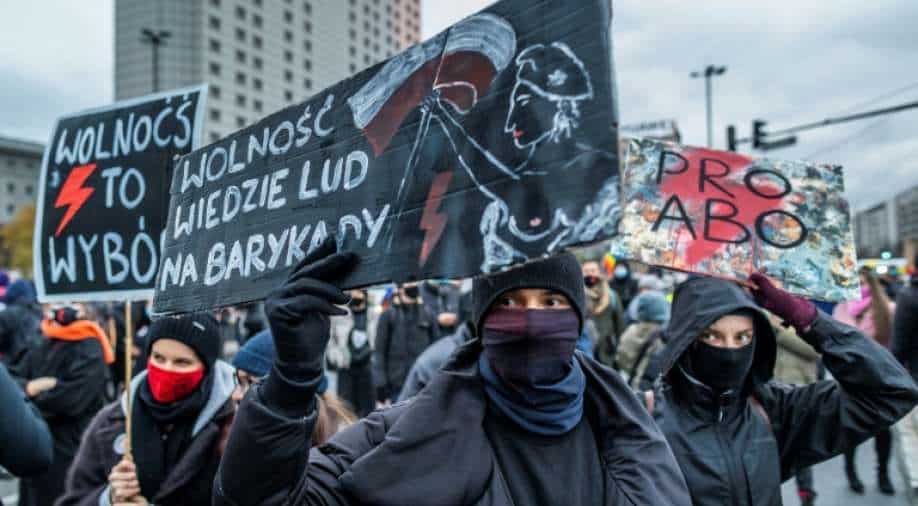 Surveys show that Poles have grown comfortable with existing abortion legislation -- among Europe's most restrictive -- adopted in 1993 as part of a church-state compromise after the collapse of communism.

While mass protests against a court verdict backing a near-total ban on abortion have taken on an increasingly political flavour in Poland, the devout Catholic country is far from turning pro-choice.

Surveys show that Poles have grown comfortable with existing abortion legislation -- among Europe's most restrictive -- adopted in 1993 as part of a church-state compromise after the collapse of communism.

Abortion is only permitted in cases of rape or incest, when the life of the mother is at risk or if there is a severe foetal anomaly. That last provision was struck down by the constitutional court last month, triggering a wave of protests nationwide.

"We're seeing a surprising mobilisation of the younger generation in particular in these protests. And in that group, support for a more liberal law is growing -- but that's not the majority," said Adam Szostkiewicz, a commentator on political and religious issues.

"The majority had been silent for years, holding the belief that if the Church says so and politicians don't question it, then evidently that's just how it must be," he told AFP.

Only 22 percent of Poles are in favour of abortion on demand, according to a survey published late last month by the independent Kantar pollsters. Sixty-two percent think it should be legal in certain cases, while 11 percent are in favour of a total ban.

- 'There was no sexual revolution' -

According to sociologist Katarzyna Zielinska, the attachment of Poles to Catholicism as well as conservative family and gender roles is rooted in the communist past.

"There was no sexual revolution in Poland. On the contrary, we had a religious renewal, because the mobilisation against the communist regime was associated with religion."

Under communism, when Poland had a liberal termination law and contraceptive measures were either unavailable or ineffective, abortions took place en masse.

Today the EU member of 38 million people sees fewer than 2,000 legal abortions every year, according to official statistics. Women's groups estimate that another 200,000 women abort illegally or abroad.

Social researcher Inga Koralewska told AFP that the communist regime liberalised abortion not for women's rights but for political reasons, possibly as "a flick on the nose at the Church, the bedrock of Polish identity" and an ally of the opposition at the time.

When communism fell, the Church was in a position of strength and efficiency while Polish state institutions were in a shambles, allowing it to play an active role in shaping the current abortion law.

Back then, Poles had more liberal views on abortion.

In 1992, 47 percent of Poles believed abortion should be permitted in difficult financial circumstances, according to the CBOS institute.

The decrease can be attributed to multiple factors, including the tendency for laws to shape attitudes as well as a societal response to the fact that politicians -- even on the left -- were loath to take on the issue lest the Church turn voters against them.

Zielinska said the impetus for change began with the smaller-scale 2016 protests against a proposed tightening of the law, when women began to speak out about their own terminations.

"Perhaps this is a step that will take us in a more liberal direction," she added.

Szostkiewicz said the "radicalisation" of Poland's liberals was a significant development.

"They've had enough of the majority's silence, are fed up with the Church's interference -- in covenant with the state -- in their private matters and are publicly voicing their anger," he said.

"I see it as a sign that this principled, radical group will most likely grow in strength, and will have an effect on broader public opinion. But will that happen now or in the near future? I don't know."