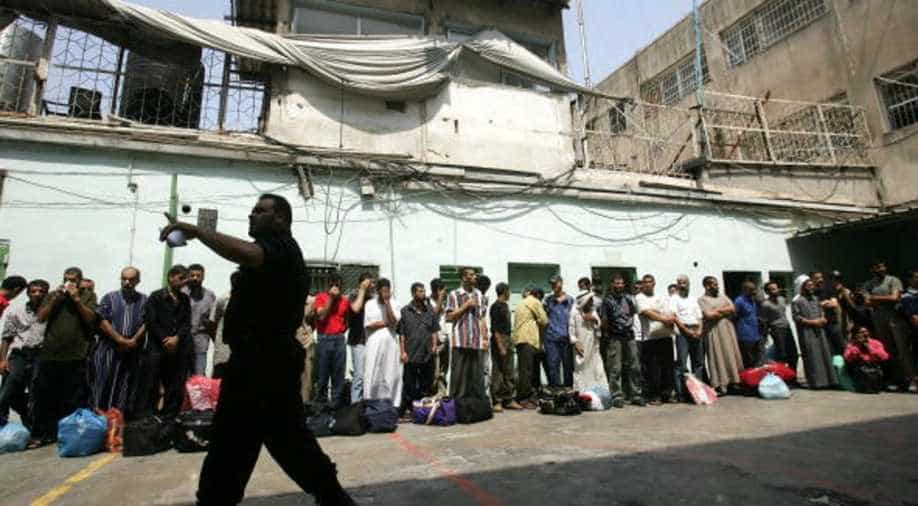 Palestinian law does not make a distinction between criminals according to their sex (In Photo) : Palestinian prisoners queue in the courtyard of the old Al-Saraya jail before they are released. Photograph:( Getty )

The 26-year-old woman facing a death sentence in Gaza was convicted of killing her husband, but her trial was secret and even her family has distanced themselves publicly from the case.

Her death sentence, the first for a Palestinian woman in more than 20 years, has raised concerns among rights activists in the Gaza Strip, the small enclave run by the Islamist movement Hamas.

They are trying to prevent her death by hanging, while navigating traditional values and Hamas's strict rule in the territory, hit by three wars with Israel since 2008 and under an Israeli blockade for a decade.

A wall of silence has also surrounded the case.

The family of the woman, identified only as Nahla A, declined to provide her with a lawyer, said Zeinab Al-Ghounimi of the Centre for Women's Legal Research and Consulting.

"They were afraid of revenge from the husband's family," she said, explaining that her organisation had stepped in and helped.

Her lawyer, Bakr Torkmani, said the woman is the mother of a young boy and had been married against her will.

She lived in complete destitution and was repeatedly beaten by her husband, he said.

He hopes "public opinion and media reports will have an impact on the judges after the haste they showed in handing out this death sentence."

Stabbed in the back?

The woman was arrested on January 31, and Gaza's attorney general Ismail Jaber has provided an outline of what is alleged to have happened.

Several days before her arrest, she had asked her husband out for some fresh air near their small home in a poor district of Khan Yunis in the southern Gaza Strip, he said.

They travelled a short distance by donkey cart before her husband "wanted to relieve himself", Jaber told AFP in his spacious office cluttered with files.

She is then accused of pulling out the knife she bought several days earlier and "stabbing him in the back several times", he said.

Authorities say she confessed and that other testimony showed that the killing was premeditated.

She was convicted then sentenced on October 5 after a trial held behind closed doors.

"Once all procedural steps have been completed, we will sign off on the implementation of the sentence," Jaber said.

"There is still the possibility of an appeal and we are placing our hopes in future rulings," he said.

Nahla's case has also highlighted rights groups' concerns over the continued use of the death penalty in the Palestinian territories -- and especially recent developments in the Gaza Strip.

In May, Jaber announced that a number of death sentences would soon be carried out in criminal cases.

Later that month, three Palestinian men were executed for murder in the strip, drawing condemnation from the UN.

Jaber said at the time that the executions were carried out as a deterrence and to reduce crime.

Rights activists say there is a lack of transparency surrounding such cases and point out there is no evidence the death penalty is more effective in deterring crime than prison.

Under Palestinian law, death sentences can be handed out for those collaborating with Israel, murderers and drug traffickers.

But there are stark differences between the Gaza Strip and the occupied West Bank, the territory controlled by the Palestinian Authority, which is dominated by president Mahmud Abbas's Fatah party.

No execution has been carried out in the West Bank since 2002, while only two were carried out there between 1994 and 2002.

Since Hamas took power in the Gaza Strip in 2007, 96 death penalties have been handed out, mostly by military courts and often for spying on behalf of Israel, said Shaqura.

Twenty-one death sentences have been handed out in Gaza in 2016 alone.

Gaza's attorney general says the sentences are necessary due to "pressure by victims' families" and the need to avoid revenge attacks.

"The aim is not to increase criminality," he said. "What we want is to reduce it and eliminate it."

He added that "Palestinian law does not make a distinction between criminals according to their sex."

Nahla meanwhile remains behind bars at a jail in Gaza City, where the territory's only women's prison unit is located.

She would like to be able to see her son, but "her husband's family refuses", her lawyer said.