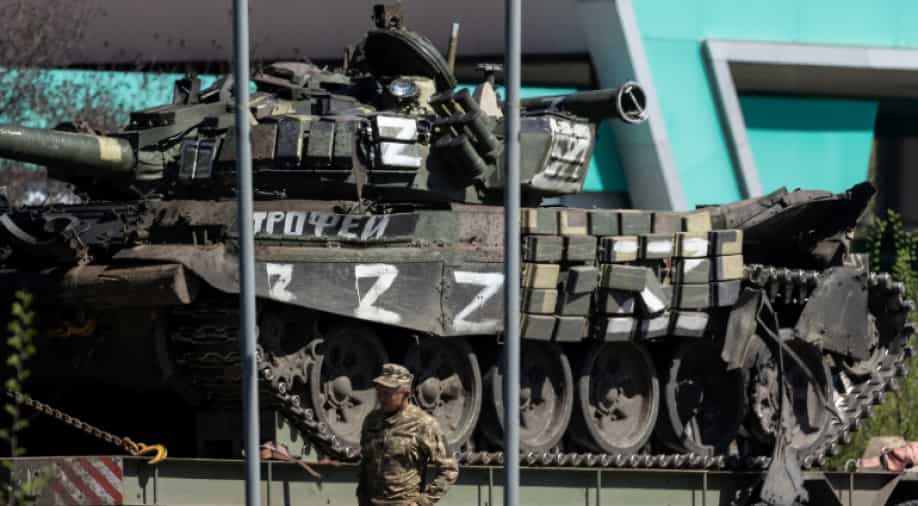 A captured Russian tank is carried on a platform by the Ukrainian army on a road outside Dnipro, Ukraine Photograph:( Reuters )

In a lengthy interview, he told Xinhua news agency that "Ukraine is currently studying the possibility of acquiring security guarantees from permanent members of the UN Security Council, including China, and other major powers."

"We propose that China becomes one of the guarantors of Ukraine's security, this is a sign of our respect and trust in the People's Republic of China," Kuleba was quoted as saying by Chinese state media.

China is the only country in the world that has not condemned Russia's invasion of Ukraine despite facing pressure from the West.

Instead, it has repeatedly blamed the North Atlantic Treaty Organisation (NATO) for provoking Russia to attack Ukraine.

Accusing Russia of compromising Beijing's signature Belt and Road infrastructure initiative, Kuleba said "We also believe that this war is not in China's interests."

Defending Kyiv's stance against Russian troops, he added "The situation is not escalating because of Ukraine, we are exercising our right to defend ourselves."

Kuleba said that Russian President Vladimir Putin's recklessness will adversely impact China's economy as the West might restrict its access to the US and European markets for helping Moscow.

In reference to a similar United Nations security resolution on non-nuclear states, a Chinese foreign ministry spokesman last month suggested that such "security assurances have clear limitations on the content and are triggered under specific conditions."

The ties between China and Russia have warmed since Chinese President Xi Jinping took power in 2013 with trade between the two countries rising to $146.9 billion last year.

However, defence experts that their interests can conflict despite sharing resentment of Washington as Putin is uneasy about the growing Chinese economic presence in Central Asia and Russia’s Far East.