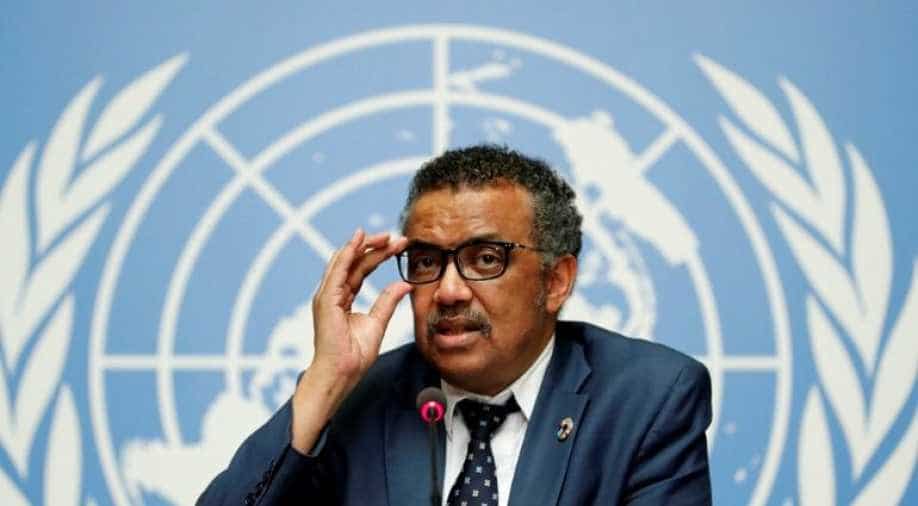 WHO Director-General Tedros Adhanom Ghebreyesus said there were indications that the Omicron-fuelled surge of Covid cases may have peaked in some countries Photograph:(AFP)
Follow Us

Reports have emerged about horrors unleashed by WHO officials in Congo, with Dr Tedros and his friends complicit with their silence

A guardian angel turned predator: that's the best way to describe the World Health Organization (WHO).

It is the agency set up to lead the world to make a healthy planet. Instead it is mired in controversies and petty politics. First, they failed to warn the world about the pandemic.

It is a broken organisation as it missed all the warnings and signs about the pandemic and the leadership couldn't care less about what's happening.

Thugs and perverts have infiltrated its ranks. Now reports have emerged about horrors unleashed by WHO officials in Congo, with Dr Tedros and his friends complicit with their silence.

Bouba car Diallo, a doctor from Canada, was in Congo managing the WHO's campaign against Ebola in 2019.

The same year he approached a Congolese nurse with a job offer. Her name was Shekina. Back then she was working as a nurse's aid in northeastern Congo, a region infested with violence and disease.

Nurses in Congo are doing god's work but they are paid practically nothing, so Shekina took up the job offer and that's when Dr Diallo started demanding sexual favours from her.

It is a classic example of a man misusing his position of power. On the one side was Diallo - an influential doctor from the West backed by the WHO. On the other was Shekina - a nurse who has known nothing but war and poverty.

She had no option but to accept.

"The economic crisis pushed me to accept this offer but I also saw that he was a great leader within the WHO, that he has a lot of influence within the WHO, so, I had no other choice but to sleep with him," Shekina said.

The WHO says its motto is to serve the vulnerable but in Congo, its doctors were preying on the vulnerable. The WHO has dozens of predators in its ranks and systemic abuse of women is a pan-organisation problem.

Another doctor, Jean-Paul Ngandu in Congo impregnated a local woman and later denied being the child's father, so the woman turned to the WHO for help. However, the organisation filed no complaint and did not punish Ngandu. Instead it covered it up.

Ngandu signed a contract with the woman and promised to pay her $100 per month until the child was born. He also bought her some land. Two WHO staffers including a manager signed as a witness to this contract.

The abusive doctor bought the woman's silence and the WHO signed off on it. In October 2020, Dr Tedros finally addressed the issue.

"We will not tolerate behaviour like this from our staff, contractors or partners. Anyone identified as being involved will be held to account and face serious consequences, including immediate dismissal," the WHO director-general said.

Dr Tedros wants people to believe that he was unaware of the reports and that he wouldn't put up with such behavior.

However, the truth is something else.

WHO's internal e-mails and staffers tell a different story. The leadership was informed of Diallo's misconduct in 2019 itself but they decided to not take the matter further because the agency's reputation was at stake.

The same happened with Dr Ngandu.

An e-mail written by a staffer to doctor Michael Yao, who was the WHO's emergency operations manager at the time, said: “We cannot afford to have people tarnishing the sweat and effort of individuals sacrificing themselves through inappropriate sexual harassment and bullying.”

One week after the e-mail was sent, Ngandu signed the contract. He says his WHO colleagues advised him to settle out of court. However, the fact is the WHO was more concerned about optics than justice. They launched an internal probe into doctor Diallo but not even a single accuser was interviewed.

Some of the female staffers are losing patience with the leadership. They say the WHO has ignored sex abuse issues for years and this is the organisation tasked with creating a safer, healthier world.

With 322-0 support, Canadian parliament votes for Uyghur resettlement in Canada

Austria expels four Russian diplomats, asks them to leave within one week