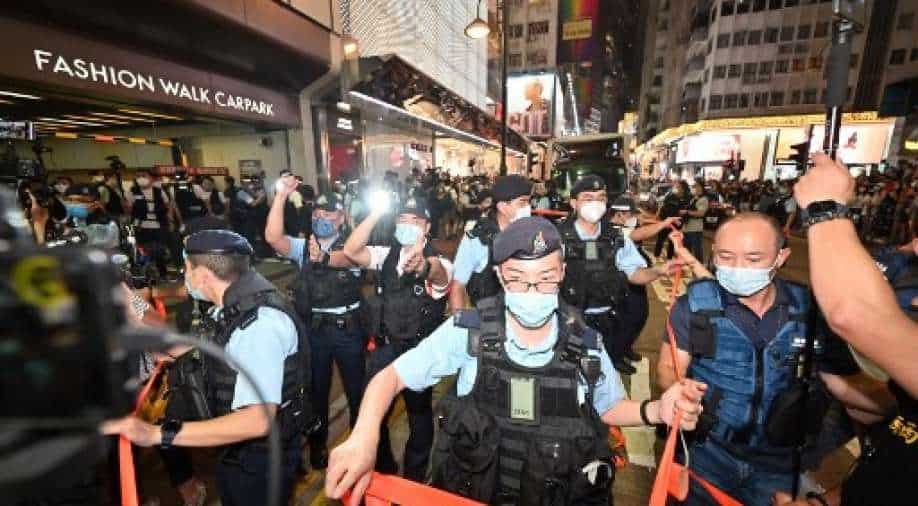 Police puts tape on the road to control crowds in the Causeway Bay district of Hong Kong Photograph:( AFP )

Although demonstrations were allowed in Hong Kong earlier to pay homage to the Tiananmen Square massacre victims, however, since 2019 when anti-China protests erupted authorities imposed the national security law disallowing demonstrations.

On the 33rd anniversary of the Tiananmen Square massacre, Hong Kong police on Saturday detained several people amid restrictions on public commemoration of the crackdown.

Chinese troops had violently oppressed students during the crackdown on June 4, 1989, in Beijing. China has never officially released the figures of casualties during the protests with discussion on the subject forbidden in China.

Reports claimed Social Democrats (LSD) party leaders were detained as the Hong Kong authorities declared they would clamp down on "unauthorised assembly".

Although demonstrations were allowed in Hong Kong earlier, however, since 2019 when anti-China protests erupted authorities imposed the national security law disallowing demonstrations.

Authorities had earlier closed the Victoria Park where protesters earlier would carry out candlelight vigils. Security forces were also deployed in the Causeway Bay shopping district with people being stopped and searched.

Reports claim Chinese authorities have set up facial recognition devices and instituted roadblocks in Hong Kong with events related to the crackdown also cancelled in nearby Macau.

Meanwhile, US Secretary of State Antony Blinken said "honour and remember those who stood up for human rights and fundamental freedoms" as the Chinese foreign ministry said it strongly "rejected and strongly condemned" the US statement.