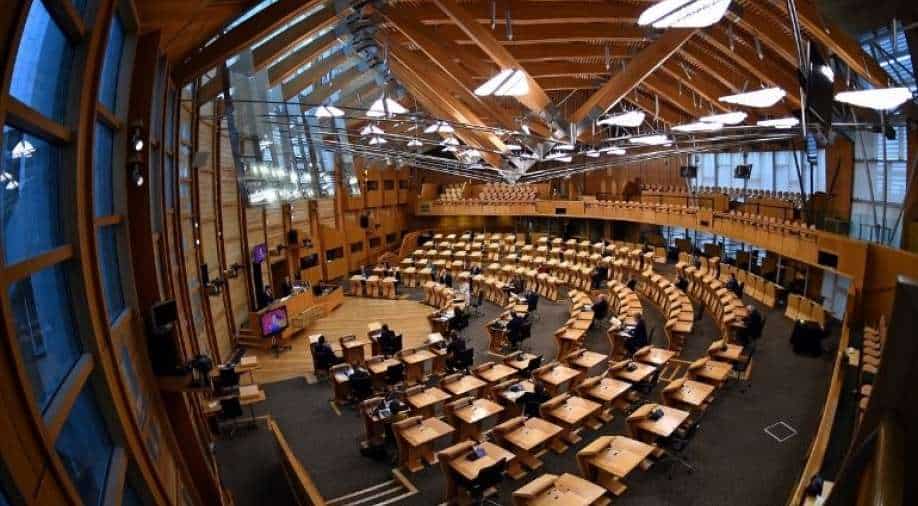 General view during the First Minister's Questions at the Scottish Parliament in Holyrood, Edinburgh, Scotland, Britain January 13, 2021, where she delivered an update on the coronavirus pandemic Photograph:( Reuters )

Is Scotland headed towards another referendum? On Saturday, the Scottish National Party published a "Roadmap to Referendum", laying the groundwork for Scotland to leave the United Kingdom

Is Scotland headed towards another referendum? On Saturday, the Scottish National Party published a "Roadmap to Referendum", laying the groundwork for Scotland to leave the United Kingdom.

Currently, the UK is grappling with the ongoing coronavirus pandemic, along with the aftermath of Brexit.

The SNP said that if it is able to win a majority in the parliament in elections set to take place on May 6, the party will pass a bill of its own to make way for a referendum after the coronavirus pandemic.

Also read: 'We will be back soon', Scotland's Sturgeon says as Britain exits EU's orbit

According to the SNP, the UK government will have to agree with the referendum or to take legal action to counter the legality of the referendum.

"Such a legal challenge would be vigorously opposed by an SNP Scottish government," the document dated January 24 claimed.

The polls suggest that the SNP will win a record majority in the Scottish parliament.

In 2014, a referendum was held in Scotland, whereby Scots voted 55-45% against freedom from the United Kingdom. But in the aftermath of UK's botched coronavirus response, clubbed with fresh woes brought on by Brexit, the public mood seems to have changed.

The Times published a poll on Saturday shed light on how the UK is perceived. In Northern Ireland, 51 per cent voters claimed to favour a referendum in the next five years. 44 per cent opposed the idea.