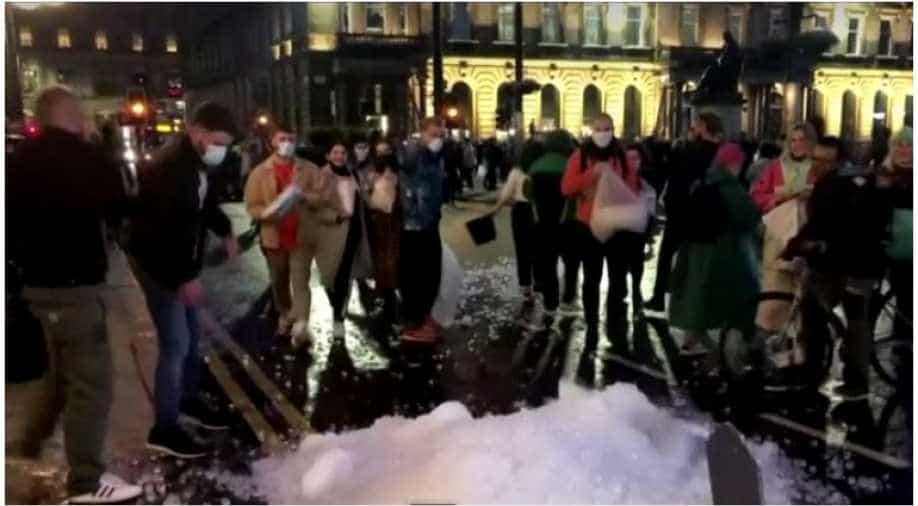 Scotland's government has ordered a 16-day closure of pubs in the country's two biggest cities, Glasgow and Edinburgh, starting on Friday. Since mid-September, number of COVID-19 cases in Scotland has been increasing

Bar and pub workers dumped ice outside Glasgow City chamber on Friday night (local time) as pubs and bars were closed as part of coronavirus restrictions. The restrictions will be in effect for 16 days from Friday.

Bucket-loads of ice were thrown on the street by Glasgow hospitality workers in George Square, as people cheered and clapped.

Pubs across England, Wales and Scotland were forced to close early from last month.

Scotland's government has since ordered a 16-day closure of pubs in the country's two biggest cities, Glasgow and Edinburgh, starting on Friday.

The second wave of the coronavirus is threatening to derail Britain's economic recovery, which was already starting to wane, according to official data.

Since mid-September, number of COVID-19 cases in Scotland has been increasing. 1054 new cases were reported on Wednesday (October 7). These were driven by infections in the central belt of Scotland. 3.4 million people stay in the central belt.

Beyond the central belt, pubs, restaurants and cafes will not be able to serve alcohol indoors, and can only serve food and non-alcoholic drinks between 6 a.m. and 6 p.m. for the 16-day period.

They will be able to continue to serve alcohol outdoors until the existing curfew time of 10 p.m., First Minister Nicola Sturgeon said earlier.