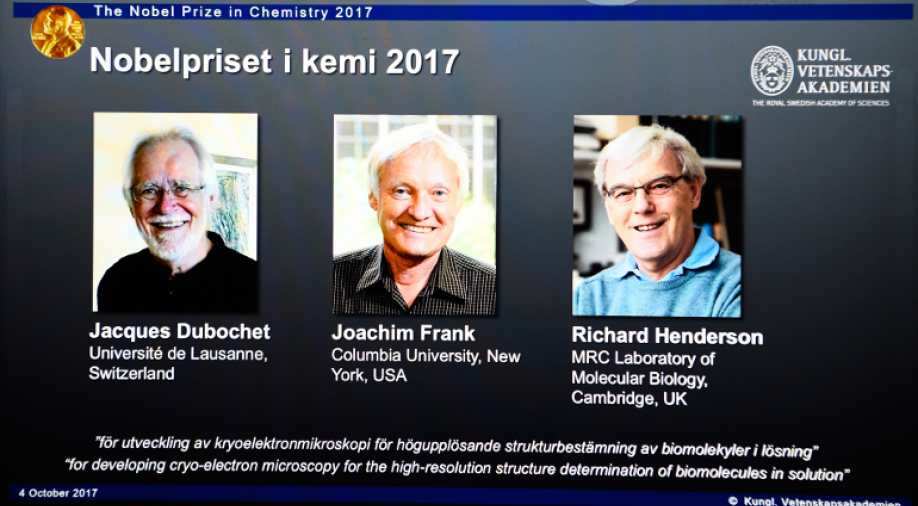 Winners of the 2017 Nobel Prize in Chemistry on October 4, 2017, at the Royal Swedish Academy of Sciences in Stockholm, Sweden (L-R) Jacques Dubochet from Switzerland, Joachim Frank from the US and Richard Henderson from Britain. Photograph:( AFP )

Three scientists have shared the 2017 Nobel Prize in Chemistry, the Royal Swedish Academy of Sciences announced on Wednesday.

The Nobel Prize in Chemistry 2017 was awarded to Jacques Dubochet, Joachim Frank and Richard Henderson "for developing cryo-electron microscopy for the high-resolution structure determination of biomolecules in solution".

In 1990, Henderson succeeded in using an electron microscope to generate a three-dimensional image of a protein at atomic resolution. This breakthrough proved the technology's true potential.

Joachim Frank, born 1940 in Siegen, Germany, is a Professor of Biochemistry and Molecular Biophysics and of Biological Sciences at Columbia University, US.

Between 1975 and 1986 Frank developed an image processing method in which the electron microscope's fuzzy two-dimensional images are analyzed and merged to reveal a sharp three-dimensional structure.

Jacques Dubochet, born 1942 in Aigle, Switzerland, is the Honorary Professor of Biophysics at University of Lausanne, Switzerland.

In the early 1980s, Dubochet succeeded in vitrifying water -- he cooled water so rapidly that it solidified in its liquid form around a biological sample, allowing the biomolecules to retain their natural shape even in a vacuum.

Thanks to the 2017 Nobel Prize winners in Chemistry, researchers can now freeze biomolecules mid-movement and visualize processes they have never previously seen, which is decisive for both the basic understanding of life's chemistry and for the development of pharmaceuticals, according to a statement released by the Royal Swedish Academy of Sciences.

The development of cryo-electron microscopy, which both simplifies and improves the imaging of biomolecules, has moved biochemistry into a new era, the statement added.

"It means that we add another tool for describing what they say the molecules of life, and for them, you could say practical applications, it means another tool to develop new drugs and new therapeutics for, I would say, any number of diseases that you could imagine, because for all of the diseases, of course, something goes wrong inside our bodies, and there is almost always possible to identify a protein or a set of processes that are not functioning well, and maybe then there will be new drugs developed that will help those processes, and for that, you need to know how molecules interact with one another, how they bind to one another, and this is what this method can give new insights into," said Astrid Graslund, member of the Royal Swedish Acadamy of Sciences.

This year's prize is 9 million SEK (1.1 million US dollars) and will be shared by the three laureates.