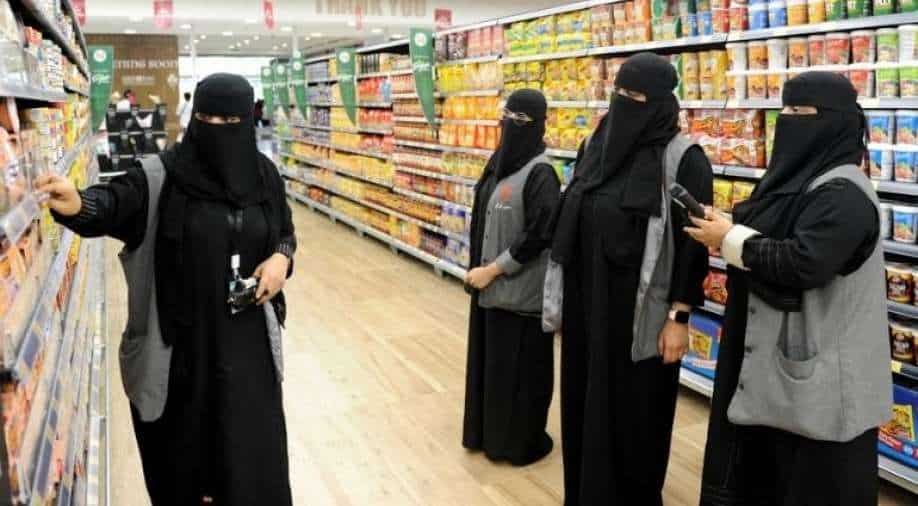 A Saudi female employee trains members of the staff at a hypermarket, newly launched by the operator LuLu and run by a team of women, in the Saudi Arabian port city of Jeddah, on February 21, 2021. Photograph:( AFP )

Saudi women can now join the Royal Army, the Navy, the Air Force, and the Armed Forces Medical Services

Is Saudi Arabia witnessing a "theological" shift? Social changes are slowly sweeping through the kingdom. After opening cinemas, allowing Christmas celebrations, letting women drive, and permitting them to attend concerts - the kingdom will now let women serve in the armed forces.

Saudi women can now join the Royal Army, the Navy, the Air Force, and the Armed Forces Medical Services.

It's a major step in the right direction for a country long curtailed by uncompromising religious police for decades. According to the Saudi Ministry of Defence, men and women can now apply for equal positions in the military through a unified admission portal.

Under this, women will be recruited as soldiers, lance corporals and sergeants. The candidates must be between the age of 21 and 40 and must be 155 centimetres tall. In addition, they must have a high school education and cannot be married to a non-Saudi man.

This move is part of Crown Prince Mohammed Bin Salman's Vision 2030 initiative where women are being allowed to advance in various fields. In the future, the Saudi establishment plans to relax the laws even further by letting women do most jobs that are reserved for men like waiting tables in restaurants and being cashiers at shopping malls.

But whether Saudi conservatives agree to such reforms is tough to determine. While Saudi Arabia embraces progressive reforms, Iran seems to be heading in a different direction. Ayatollah Khamenei, the Supreme Leader of Iran has issued a fatwa stating that women in cartoons must be depicted wearing a hijab.

Also read: Opinion: What does it take to recontextualise Islam in Saudi schoolbooks?

"Although wearing hijab in such a hypothetical situation is not required per sat, observing hijab in animation is required due to the consequences of not wearing the hijab", he recently said.

Since Iran's Islamic Revolution 40 years ago, women have been forced to don the hijab. Even though there are no laws compelling them to do so, government officials have set certain dressing standards for women like forcing them to cover their hair for the sake of modesty. Those who don't are often reprimanded, fined, even arrested.