US migrant tragedy: At least 46 found dead in tractor-trailer in San Antonio, Texas 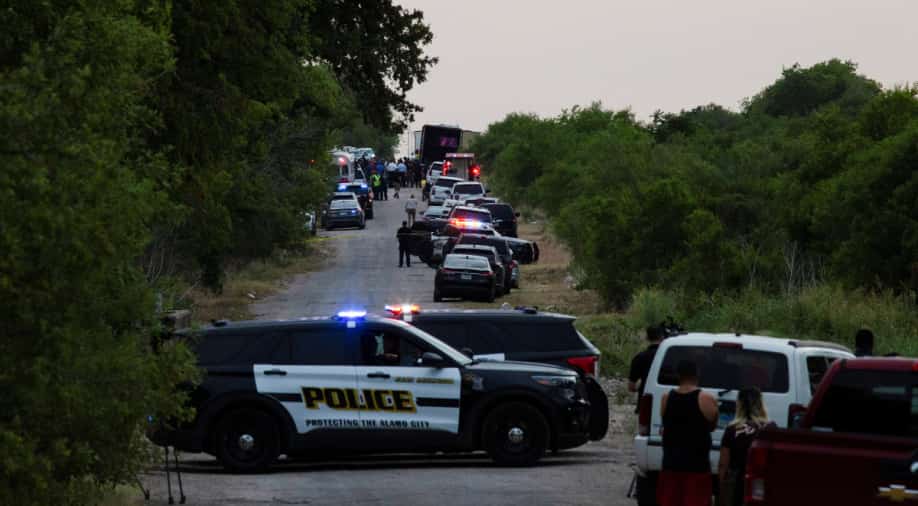 Law enforcement officers work at the scene where people were found dead inside a trailer truck in San Antonio, Texas Photograph:( Reuters )

San Antonio Police Department officers were searching for the vehicle's driver who was missing from the scene, according to the New York Times

In what appears to be one of the most deadly recent incidents of human smuggling along the US-Mexico border, at least 46 people were found dead inside a tractor-trailer on Monday in San Antonio, Texas.

Citing a law enforcement official briefed on the matter, the truck was found next to railroad tracks in a remote area on the city's southern outskirts.

Police vehicles and ambulances had surrounded a large truck in pictures posted on Twitter by a KSAT reporter.

San Antonio Police Department officers were searching for the vehicle's driver who was missing from the scene, according to the New York Times.

San Antonio, which is about 160 miles (250 km) from the Mexican border, is currently experiencing high humidity.

Also see | In pics: Thousands of migrants in Mexico head to US border coinciding with Americas summit

Describing them as a "result of his deadly open border policies", Greg Abbott, the governor of Texas, blamed US President Joe Biden for the deaths.

Many undocumented migrants arrive in the United States by traveling by tractor-trailers which is a common though dangerous means.

Calling for urgent action to "dismantle human smuggling rings and replace them with expanded avenues for legal migration", the Democratic candidate running against Abbott, Beto O'Rourke said the reports were devastating.

Highlighting that the victims' nationalities were still unknown, Marcelo Ebrard, Mexico's Foreign Minister, said the country's consul was en route to the site of the discovery.

Any Mexicans involved in the incident will be provided aid, the Mexican General Consulate in San Antonio said on Twitter.

After being transported in a tractor-trailer that was discovered by San Antonio police in a Wal-Mart parking lot, ten migrants died in July 2017 and the driver was sentenced to life in prison for his role in the smuggling operation.