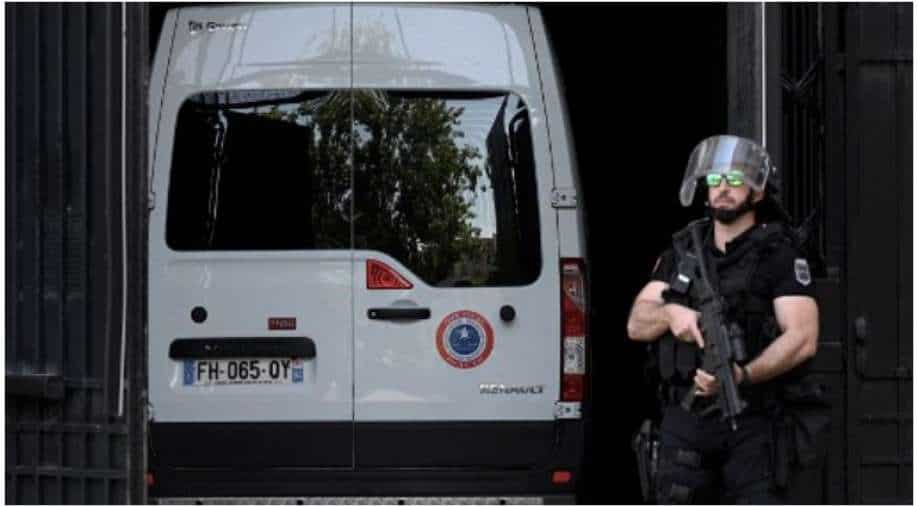 A French Gendarme stands guard next to a prison van transporting Felicien Kabuga, one of the last key fugitives wanted over the 1994 Rwandan genocide, at the Paris court on May 19, 2020. The 84-year-old was arrested on May 16, 2020 in the suburbs of Paris, where he had been living under a false identity. Once one of Rwanda's richest men, Kabuga is accused of using his wealth and influence during the genocide to funnel money to militia groups. Photograph:( AFP )

The UN says 800,000 people were murdered in a 100-day rampage that began in April 1994 in Rwanda, in scenes of horror that shocked the world

Felicien Kabuga, the alleged financier of the horrific Rwandan genocide pleaded not guilty in a United Nations court. He was produced in the court after being on the run for a quarter of the century. Formerly one of Rwanda's richest men, Kabuga allegedly helped set up hate media that urged ethnic Hutus to "kill the Tutsi cockroaches". He also funded militia groups.

Kabuga, now in his 80s, was arrested in France in May. He was then transferred to the court in The Hague in October. He faces charges of a key role in killing of 800,000 Tutsis and moderate Hutus.

The frail Kabuga sat in a wheelchair behind a glass screen in the courtroom, wearing a coronavirus mask. A court official helped him adjust his headphones. His defence lawyer Emmanuel Altit said Kabuga was "very tired" and "preferred not to speak", when asked by judge Iain Bonomy if the former businessman wanted to enter a plea.

"Given the situation, I would be grateful if you could consider this lack of response as a plea of not guilty on all the counts, under the rules and procedures," Altit told the court.

Kabuga, who until his arrest near Paris was one of the world's most wanted men, had already denied the charges in his court appearances in France.

The Rwandan faces seven counts including genocide, incitement to genocide, extermination and persecution.

The UN court will later decide if he will be transferred to its branch in Tanzania for trial.

The UN says 800,000 people were murdered in a 100-day rampage that began in April 1994 in Rwanda, in scenes of horror that shocked the world.

Kabuga was then an ally of the ruling party in Rwanda. He allegedly helped create the Interahamwe Hutu militia group and the Radio-Television Libre des Mille Collines (RTLM), whose broadcasts incited people to murder.

The indictment, read by court official said, "RTLM broadcasts contributed to the deaths of hundreds of thousands of persons identified as Tutsi civilians."

The radio station also identified the hiding places of Tutsis where they were later killed, it said.

He is also accused of helping to buy machetes that were distributed to genocidal groups, and ordering them to kill Tutsis. Kabuga spent years on the run using a succession of false passports, with investigators saying that he had been helped by a network of former Rwandan allies to evade justice.

Following his arrest in a small apartment near Paris, his lawyers argued that Kabuga -- who says he is aged 87 but according to the arrest warrant is 84 -- should face trial in France for health reasons. But France's top court ruled he should be moved to UN custody on a warrant issued in 1997 by the International Criminal Tribunal for Rwanda (ICTR). Kabuga was initially to be transferred to the UN court's facility in Arusha, Tanzania, which took over the ICTR's duties when it formally closed in 2015.

But a UN judge ruled he should first be taken to the court's Hague branch for a medical examination, and it was not immediately known when or if Kabuga might be transferred to Arusha.