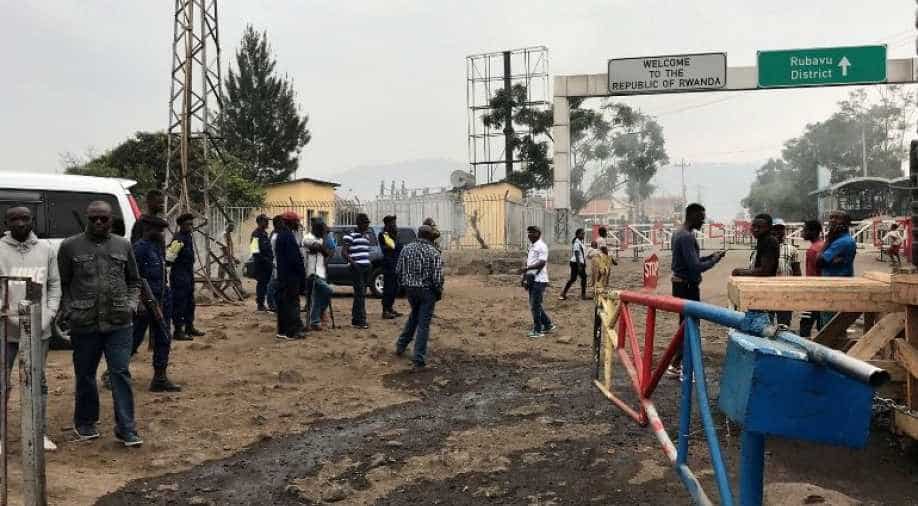 Congolese customs agents gather at the gate barriers at the border crossing point with Rwanda following its closure over ebola threat in Goma. Photograph:( Reuters )

Rwandan health minister Diane Gashumba said there had been traffic slowdowns at the border, caused by increased health screening in response to confirmation of new infections in Goma, a transit hub of at least 1 million people.

Rwanda's border with Ebola-hit Democratic Republic of Congo was fully open late on Thursday, a minister said, hours after Congolese traders had reported it shut following a third case of the disease in the Congolese border city of Goma.

Rwandan health minister Diane Gashumba said there had been traffic slowdowns at the border, caused by increased health screening in response to confirmation of new infections in Goma, a transit hub of at least 1 million people.

"The border was never closed and it is not closed," Gashumba told reporters.

The outbreak has killed more than 1,800 people in Congo since it was declared one year ago and become the second-worst on record. Two people have died of the disease in Uganda, which also borders Congo, but there have been no registered cases in Rwanda.

Earlier, Congolese health authorities confirmed that a third case had been diagnosed in Goma, increasing fears the virus could take root in the densely populated city, which lies more than 350 km south of where the outbreak was first detected.

A second patient died in Goma on Wednesday after he sought treatment too late and was already bleeding, authorities said. These second and third cases in Goma, a father and daughter, are not linked to the first case, authorities say.

Nestled in hilly country at the foot of an active volcano, the city lies just 7 km from Rwanda's main border town of Gisenyi.

Some 45,000 people go through the main border post between the two per day, according to an immigration official.

Lucien Kalusha, a Congolese hairdresser who crosses every day to work in Rwanda, told Reuters earlier on Thursday he and others had not been able to cross.

"By closing the border like this, they deprive a lot of people of their earnings today. Most of the women here cross into Rwanda to find food for us in Goma," he said.

Another, smaller border post near Goma was unusually quiet, as traders and vehicles had left after it appeared to have been closed.

After the first Ebola case in Goma was confirmed in mid-July, the World Health Organisation (WHO) declared the outbreak an international health emergency. It was earlier reluctant to do so, partly out of fear countries bordering Congo might shut their frontiers.