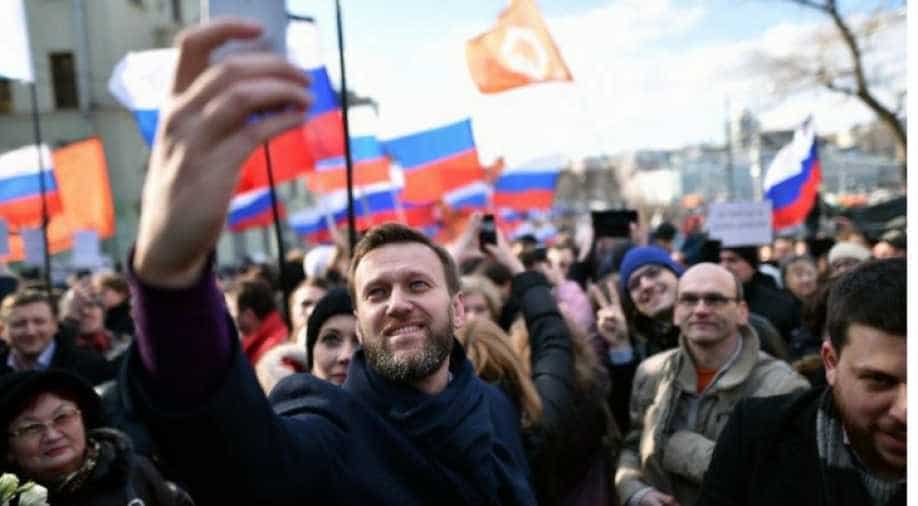 Navalny has built a robust protest movement despite constant police harassment, tapping into the anger of a younger generation yearning for change. Photograph:( AFP )

The Russian Police detained opposition leader Alexei Navalny moments after he appeared at a rally to urge voters to boycott what he said would be a rigged presidential election in March.

Surrounded by supporters, the 41-year-old chanted "Swindlers and thieves" before being detained by police shortly afterwards at an unsanctioned gathering in the city centre amid heavy police presence.

"I have been detained," Navalny tweeted. "This means nothing. Come to Tverskaya (Avenue)," he said, referring to Moscow's main thoroughfare.

"You are not rallying for me, but for yourselves and your future."

Around 90 people were detained across the country, according to OVD-Info, an independent group which monitors crackdowns on demonstrations.

Teenagers, pensioners and middle-aged citizens ignored police broadcasts to clear the square, chanting “Putin is a thief” and “Russia without Putin”, waving placards and Russian flags.

A dozen buses filled with riot police flanked the square, as the protest gradually swelled. “Get Putin out of power,” shouted one elderly lady as she moved through the crowd, under a placard reading: “Putin, you leave us no choice.”

Russia’s election commission in December formally banned Navalny from taking part in the election, where Mr Putin will almost certainly win another six-year term in power and extend his 18-year rule.

Officials rejected Navalny’s candidacy because of a February 2017 criminal conviction for embezzlement, which itself has been criticised by independent legal experts and foreign judges as politically motivated.