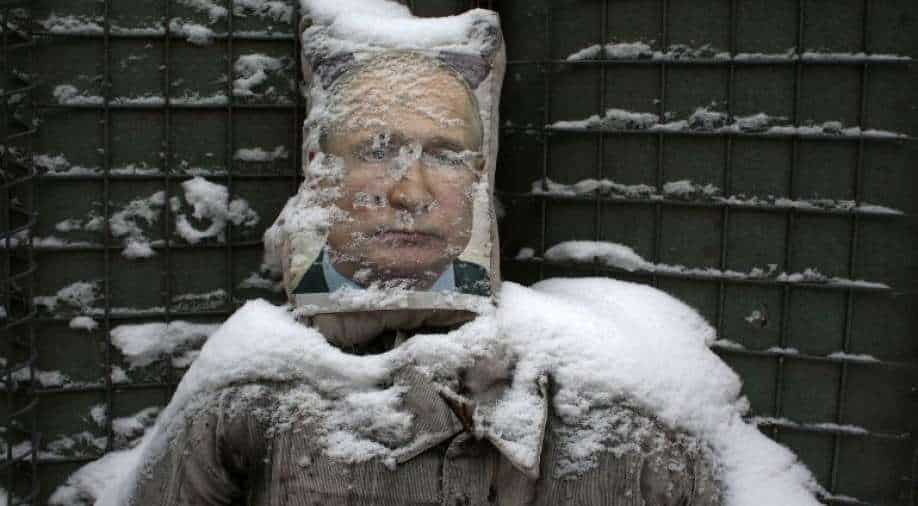 A poster of Russian President Vladimir Putin is used as target practice along a trench on the frontline with Russia-backed separatists near Zolote village, in the Lugansk region, on January 21, 2022. Photograph:( AFP )

Ukraine was a member of the Soviet Union until 1991, and since then, it has been a less-than-perfect democracy with a sluggish economy and a foreign policy that oscillates between pro-Russian and pro-European positions.

The tensions between Russia and Ukraine that could potentially lead to a full-blown war are influenced by a tussle for strategic influence and a row over territorial borders.

Ukraine is seen by Moscow as a crucial buffer for the North Atlantic Treaty Organization, or NATO.

Russia is viewed by Ukraine as an invader that has already taken sections of its territory.

Here are a few points that will help you understand the conflict's origins and current state.

What is the origin of the Russia-Ukraine conflict?

Ukraine is a country with an area of 603,628 sq km, sandwiched between Russia and Europe.

It was a member of the Soviet Union until 1991, and since then, it has been a less-than-perfect democracy with a sluggish economy and a foreign policy that oscillates between pro-Russian and pro-European positions.

Protests against Ukrainian President Viktor Yanukovych's decision to reject a plan for greater economic integration with the European Union erupted in the capital city of Kiev in November 2013.

In the crisis, Russia backed Yanukovych, while the US and Europe backed the demonstrators.

President Yanukovych fled the nation in February 2014 after a harsh crackdown by state security forces unwittingly drew even more protestors and worsened the crisis.

After Crimeans decided to join the Russian Federation in a controversial local referendum in March 2014, the Russian military took control of Ukraine's Crimean region before legally annexing the peninsula.

The need to preserve the rights of Russian people and Russian speakers in Crimea and southeast Ukraine was underlined by Russian President Vladimir Putin. 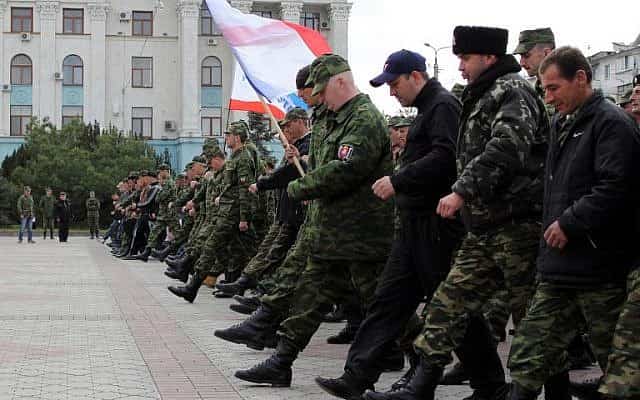 Russian soldiers and pro-Russian volunteers during a military parade rehearsal in preparation for the Victory Day parade in Simferopol, Crimea, on April 12, 2014. (AFP Photo)

Months of bloodshed followed the move by pro-Russian separatists in Ukraine's Donetsk and Luhansk regions to declare independence from Kyiv.

Despite the fact that Kyiv and Moscow signed a peace pact in Minsk in 2015, sponsored by France and Germany, ceasefire violations have occurred on several occasions.

Since March 2014, more than 3,000 civilians have died in eastern Ukraine as a result of the conflict, according to UN estimates.

The leaders of Russia, Ukraine, France, and Germany convened in Paris in December 2019 to reaffirm their commitment to the 2015 peace pact, but little progress on a political settlement has been made.

Why does it matter to Putin if Ukraine joins NATO?

NATO, the North Atlantic Treaty Organization, was established in 1949 to counter Soviet aggression.

Since then, the alliance has grown to include 30 nations, including Lithuania, Estonia, and Latvia, all of which were once Soviet republics.

According to the treaty, if one of NATO's members is invaded or attacked by a third party, the entire alliance will mobilise to defend it.

The Kremlin wants NATO to ensure that Ukraine and Georgia, another former Soviet republic that Russia invaded briefly in 2008, will not join the alliance.

Putin cannot deny Ukraine that right, according to the Biden administration and NATO partners, but there are no plans to award Ukraine membership anytime soon.

What is the current state of affairs at the border?

The movements and concentrations of soldiers in and around Ukraine have been labelled as "unusual" by the US and NATO.

Despite warnings from US President Joe Biden and European leaders that an invasion by Putin would be disastrous, up to 100,000 Russian troops remain stationed near the Ukrainian border.

According to US intelligence conclusions released in December, Russia could launch a military operation in Ukraine in 2022.

If Russia increases its troops deployment in Ukraine or into NATO countries, the conflict in Ukraine risks deteriorating further and escalating into an all-out war.

Russia's activities have prompted fears about its intentions abroad in Eastern Europe, and a Russian intervention into a NATO territory would elicit a NATO ally's response.

The battle has heightened tensions in Russia's relations with the US and Europe, hurting prospects for collaboration in other areas such as counter-terrorism, arms control, and a political solution in Syria.