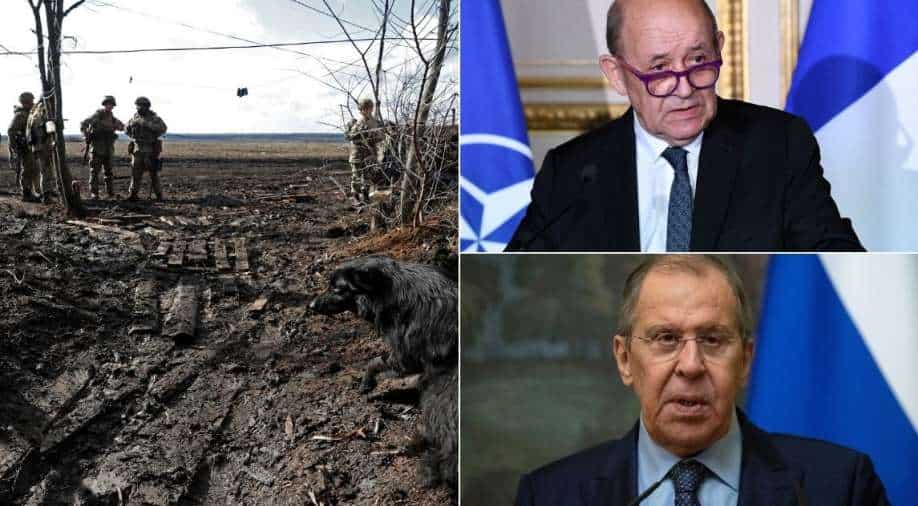 (L) Service members of the Ukrainian armed forces stand at combat positions near the line of separation from Russian-backed rebels near the village of Bohdanivka in the Donetsk region, Ukraine on February 19, 2022. Photograph:( Reuters )

Macron and Putin agreed to work for a ceasefire in eastern Ukraine, Macron's office said, adding the leaders also agreed on "the need to favour a diplomatic solution to the ongoing crisis and to do everything to achieve one".

The office of the French President also stated that Putin and Macron would work "intensely" to allow the Trilateral Contact Group, which includes Ukraine, Russia and the OSCE, to meet "in the next few hours".

The aim of the meeting is said to be getting all interested parties to commit to a ceasefire at the contact line" in eastern Ukraine, where the government troops and pro-Russian separatists are facing each other.

Both the leaders also agreed that talks between Russia, Ukraine, France and Germany should resume implementing the so-called Minsk protocol which in 2014 had already called for a ceasefire in eastern Ukraine.

Both also agreed to work towards "a high-level meeting with the aim of defining a new peace and security order in Europe", Macron's office said.

On the other hand, stated that both the leaders had an in-depth discussion of the developments around Ukraine as well as developments regarding "long-term legal security guarantees for the Russian Federation".

A Kremlin statement noted that serious concerns were expressed due to the quickly deteriorating situation along the contact line in Donbass. Putin noted that "provocations from Ukrainian militants were the reason for the escalation".

Ahead of the conversation, the French President's office said that the call represented "the final possible and necessary efforts to avoid a major conflict in Ukraine."

This was the fifth telephonic conversation between Putin with his French counterpart since the beginning of this year. Earlier this month on February 7, both the leaders met in person when Macron visited Russia.

The latest call lasted 105 minutes and is termed as the last-ditch effort to avert a potential Russian invasion of Ukraine. Macron has been vouching for diplomatic ways of solving the highly sensitive border crisis.

Although, Macron has previously reiterated his determination to preserve Ukraine's territorial integrity and sovereignty.

The call came a day after Ukrainian President Volodymyr Zelensky told Macron that he would not respond to what he called Russia's "provocations", according to the Elysee. He said he remained open to "dialogue" with Moscow.

But in a speech to the Munich Security Conference, he also called on Western governments to stop what he said was "a policy of appeasement" towards Putin.

After the conversation with Putin on Sunday, Macron went on to talk with Zelensky on the telephone, the French presidency said.

Meanwhile, Belarus on Sunday (February 20) said that joint exercises involving Russia and Belarus forces were being extended due to tension over Ukraine, despite promises from Moscow that the drills would end this weekend.

The Belarusian defence minister Victor Khrenin said in a statement, "The presidents of Belarus and Russia decided to continue inspections of the readiness of Union State forces."