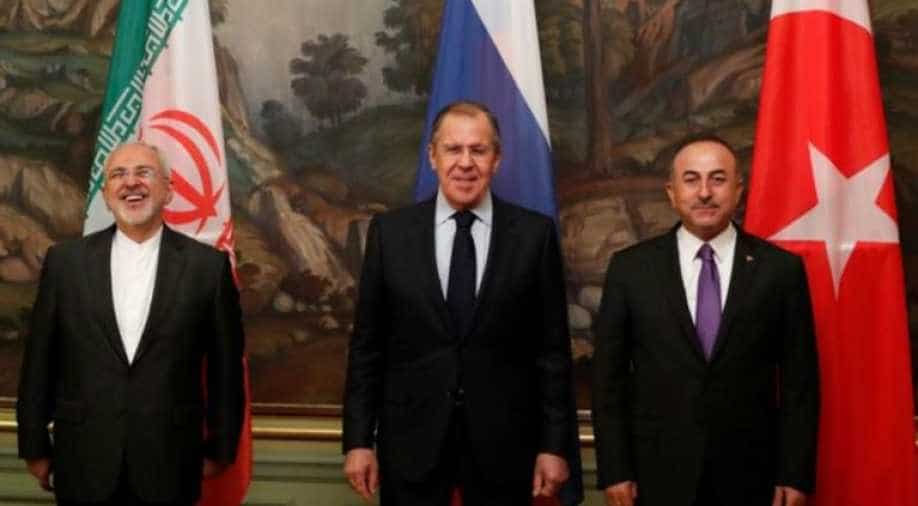 Russia, Turkey and Iran need to help Syria's government clear its country of terrorists, Russian Foreign Minister Sergei Lavrov said on Saturday during a trilateral meeting in Moscow with his counterparts from Turkey and Iran.

"I am sure that it is necessary today to help the Syrians to finish clearing the country of terrorists and we all are helping the Syrian government to make this happen faster," said Lavrov.

"I am sure that it is necessary today to help the Syrians to finish clearing the country of terrorists and we all are helping the Syrian government to make this happen faster," noted Iran's Foreign Minister, Mohammad Javad Zarif.

"I agree with Javad Zarif that best solution is the political solution and any military solution is illegal and unsustainable," said Turkey's Foreign Minister Melvut Cavusoglu.

Turkish Foreign minister Mevlut Cavusoglu added that any military solution in Syria would be illegal and unsustainable. Cavusoglu said the three countries could work together to help the Syrian people and there needed to be a new push to reach a political solution.

Declarations of some Syrian opposition figures are damaging efforts to inject new life into Geneva peace process, Russian Foreign Minister Sergei Lavrov said, adding that there can be no preconditions for Geneva talks.

Russia, Iran and Turkey agreed that Syria peace process must continue despite Western missile strikes, Lavrov said after meeting his Iranian and Turkish counterparts in Moscow.

"This attack (on Syria by U.S., Great Britain and France) of course has thrown back the efforts to advance in the political process. Nevertheless, today we have firmly confirmed that these efforts must be continued, we agreed on concrete steps which all three of our countries will take both collectively and individually to return all of us to the path of stable progress towards the goals of Resolution 2254," Lavrov noted.

Turkish Foreign Minister Mevlut Cavusoglu said that Russia, Iran and Turkey need to work in coordination with the United Nations to ensure the legitimacy of any political solution in Syria.

"We need to convene and launch the constitutional committee in the near future. We discussed how we should work with the United Nations in this respect to legitimize the political process. We talked with the UN special envoy on Syria and we need to work closer with him and to involve the United Nations more actively," Cavusoglu added.

Trump has said that unless European allies fix the "terrible flaws" in the Iran nuclear deal by May 12, he will refuse to extend US sanctions relief for oil-producing Iran.