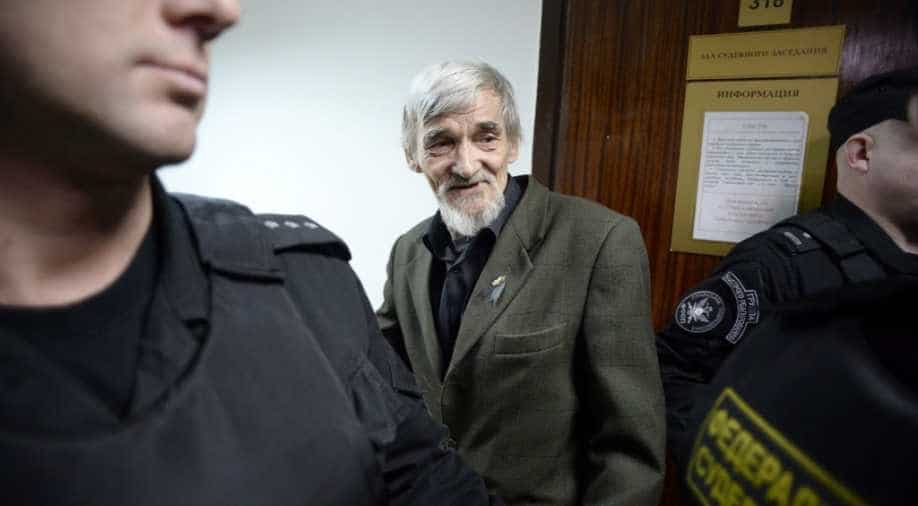 Yury Dmitriyev, the local head of prominent rights group Memorial in Karelia in northwestern Russia, was facing up to 15 years in a penal camp under the charges.

A Russian court on Wednesday convicted a respected Gulag historian in a controversial sexual abuse case, but handed down a sentence that should see him freed in the autumn.

Yury Dmitriyev, the local head of prominent rights group Memorial in Karelia in northwestern Russia, was facing up to 15 years in a penal camp under the charges.

His Russian and foreign supporters insist he is being punished for his work digging into Stalin-era massacres.

He was first arrested in late 2016 on child pornography charges, then acquitted in 2018, and then arrested again in the new sexual assault case. He has denied the charges.

After a new trial held behind closed doors, a judge in the city of Petrozavodsk on Wednesday found Dmitriyev guilty of sexually abusing his adopted daughter, sentencing him to three-and-a-half years in prison.

His lawyer Viktor Anufriyev told reporters that with time served in pre-trial detention Dmitriyev, 64, would be free in three-and-a-half months.

Anufriyev said his client was content with the verdict. "He knows he is not guilty," he said.

Memorial said in a statement that the verdict following such serious charges "can mean only one thing: the prosecution has no proof of Dmitriyev's guilt".

"Nevertheless, these charges have already robbed Yury Dmitriyev of more than three years of freedom and ruined his adopted daughter's life," it said.

Memorial argues his prosecution is part of a growing crackdown on dissenters and that he was targeted for calling attention to one of the darkest chapters in Russia's history.

Dozens of his supporters gathered outside the courtroom on Wednesday and some said the verdict was as close as Dmitriyev could get to an acquittal.

Yan Rachinsky, a director at Memorial, said the verdict allowed Russian officials to save face after a robust public campaign in Dmitriyev's defence. "It won't see a man die in prison," he added.

Fellow historian Anatoly Razumov said the fact that Dmitriyev would soon get back to his work is a "victory".

Ukraine's Foreign Minister Dmytro Kuleba said on Facebook: "Yury Dmitriyev is a victim of the Russian state's desire to trample on historic memory and those who cherish it."

Dmitriyev is known for helping open the Sandarmokh memorial in a pine forest in Karelia in memory of thousands of victims -- including many foreigners -- murdered in 1937 and 1938.

"Thanks to Yury Dmitriyev, I know where my grandfather was buried," supporter Galina Ivanova said outside the courthouse.

"And this is a huge deal, I will always be grateful to him."

When the historian was initially arrested in late 2016 on child pornography charges, he spent more than a year in pre-trial detention, before calls by prominent figures resulted in his release.

But in a stunning turnabout, he was detained again on assault charges later that year after a higher court overturned the not guilty verdict.

Dmitriyev's previous case focused on naked photographs of his adopted daughter seized during a search of his home.

Independent newspaper Novaya Gazeta reported that Dmitriyev's cellmates had tried to pressure him into admitting his guilt or face sexual abuse in prison.

Speaking in court during his second trial this month, Dmitriyev, who was himself adopted, said he had done everything to raise his daughter to be happy and healthy.

In the speech published by the Meduza news portal, he also said it was important for people to remember their past.

"The strength of the state is not in its tanks and guns, in its nuclear rockets or an ability to tell everyone to flip off," he said.

"No, the strength of the state is in its people."