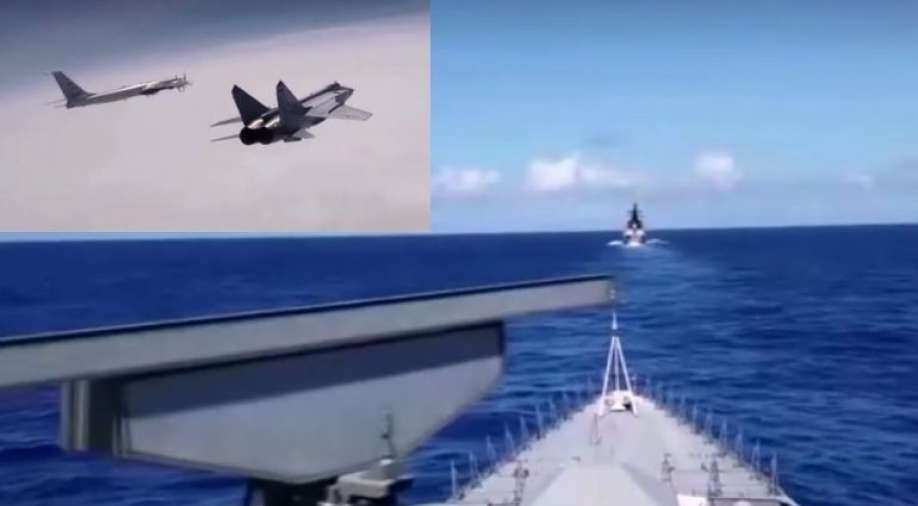 According to the Russian military, missile cruiser "Varyag", frigate "Marshal Shaposhnikov" were also on display during the drills.

Russian military held joint exercises with its navy and Air Force in the Pacific.

The military used warships, submarines and supporting aviation, including Tu-142mz long-range anti-submarine aircraft as part of the exercise.

According to the Russian military, missile cruiser "Varyag", frigate "Marshal Shaposhnikov" were also on display during the drills.

Reports said US forces were on high alert after Russian destroyers and jets came within 35 miles of Hawaii.

Russia's defence ministry had said earlier that the drills had taken place some 300 miles off Hawaii as reports claimed the US military officials scrambled F-22 Raptors from Joint Base Pearl Harbor Hickam on Sunday after Russian bombers were spotted, however, it did not enter the Air Defence Identification Zone.

“The Russian vessels are transiting west. As part of our normal daily operations, we continue to track all vessels in the Indo-Pacific area of operations through maritime patrol aircraft, surface ship, and joint capabilities,” US Indo-Pacific Command spokesman Captain Mike Kafka said.

Captain Kafka added that Russian ships had come within 20 to 30 nautical miles off Hawaii as a US carrier strike group was also moved closer to Hawaii.

However, the US informed that Russian vessels were transiting west and out of the Hawaii Operation Area. There were unconfirmed reports Russian forces had undertaken mock drills in sinking aircraft carrier which alarmed US officials.

The Russian defence ministry had said that it had “worked out the tasks of detecting, countering and delivering missile strikes against an aircraft carrier strike group of a mock enemy.”