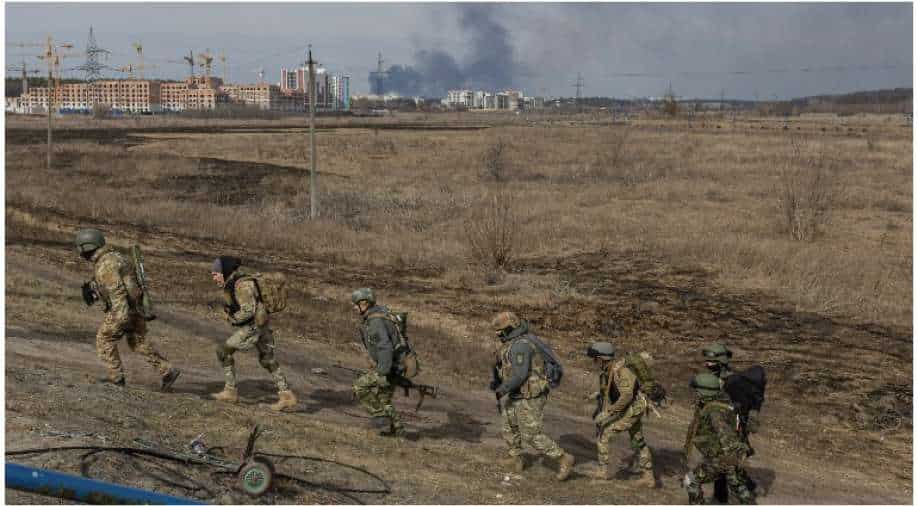 Ukrainian servicemen walk near a destroyed bridge as Russia's invasion of Ukraine continues, in the town of Irpin outside Kyiv, Ukraine, March 12, 2022 Photograph:( Reuters )

Russia on Sunday (March 13) launched an attack on Ukrainian military training ground which is closer to Poland. The training ground is located in Ukraine's western city of Lviv.

Russia "launched an air strike on the International Centre for Peacekeeping and Security," the head of the Lviv regional administration, Maxim Kozitsky, said on his verified Facebook page.

"Unfortunately, we have 9 dead. 57 people were injured," Lviv's mayor, Andriy Sadoviy, wrote on Telegram.
Some of the injured have been taken to Lviv hospitals, he said.

The military base in Yavoriv, located some 40 kilometres (25 miles) northwest of the city, was a training centre for Ukrainian forces with foreign instructors, including from the United States and Canada.

It was also a hub for joint exercises of Ukrainians soldier with NATO allies.

Ukrainian Defence Minister Oleksiy Reznikov said "foreign instructors work here," although it was unclear whether any were present during the attacks.

Foreign troops left Ukraine shortly before Russian launched an invasion of its pro-Western neighbour on February 24.

The United States said on February 12 that it withdrew 150 of its instructors from Ukraine.

Reznikov condemned the bombardment as a "new terrorist attack on peace & security near the EU-NATO border", calling for the imposition of a no-fly zone.

"Action must be taken to stop this. Close the sky!" he wrote.