Romania protests rage on despite scrapping of corruption law 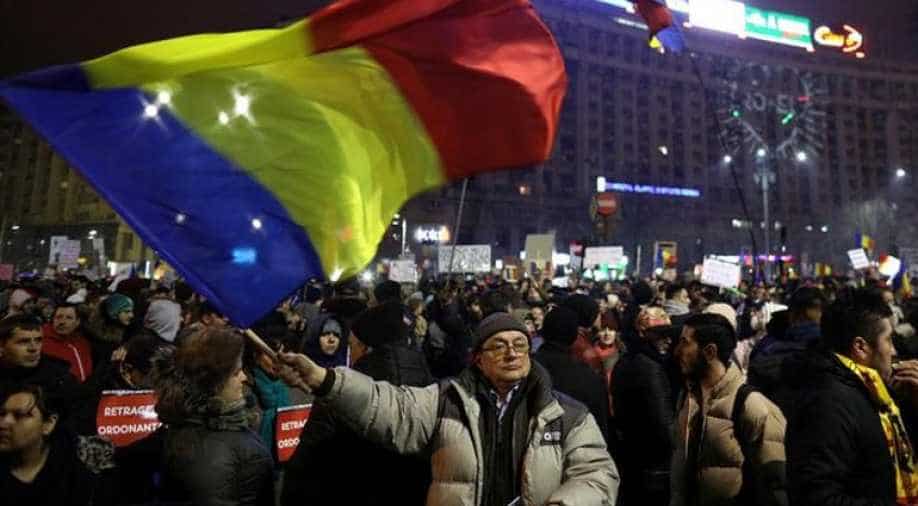 Protests raged on for the sixth day as thousands of people gathered in Bucharest and elsewhere. Photograph:( Reuters )

Romania's government scrapped a contentious corruption decree Sunday in a climbdown after the biggest mass demonstrations since the fall of communism, but protests still raged on for a sixth straight day.

As thousands of people gathered in Bucharest and elsewhere, the government announced it had repealed a decree which would have shielded certain corruption offences from prosecution but was seen as rolling back efforts to fight political graft.

This fulfilled the promise made late on Saturday by a pale and tired-looking Prime Minister Sorin Grindeanu after a fifth day of demonstrations that have been the largest since the ousting and summary execution of communist dictator Nicolae Ceausescu in 1989.

But the announcement didn't stop demonstrators gathering again on Sunday to make it clear to Grindeanu and his left-wing government, which has been in office only a month, that they were on thin ice.

"I hope that this is a real repeal... We are going to keep an eye on them to make sure we are not being had," said protester Daniel, 35.

"Today we are going to break new records," electrician Florian, 40, told AFP in Bucharest, distributing free pretzels and tea at Victory Square, the seat of the government and epicentre of the protests.

By early evening Sunday, around 15,000 people were in the square, by media estimates, and the crowd was still growing. Again they brandished placards and national flags, chanted and blew whistles and plastic vuvuzela horns.

Meanwhile, around 1,200 pro-government supporters staged a demonstration outside the presidency, calling for the centre-right head of state Klaus Iohannis, a fierce critic of the government, to resign. "Iohannis is a traitor to the country," one banner read.

The government also sought, via a separate decree to be reviewed by parliament next week, to free some 2,500 people from prison serving sentences of less than five years.

But Grindeanu's Social Democrats (PSD) have argued the measures were meant to bring penal law into line with the constitution and reduce overcrowding in prisons.

Critics denounced the move as a brazenly transparent attempt to let off PSD officials and lawmakers who have been ensnared in a major anti-corruption drive of recent years.

That push saw almost 2,000 people convicted for abuse of power between 2014 and 2016, and a serving prime minister, five ministers, 16 lawmakers and five senators go on trial.Grindeanu's climbdown on Saturday evening -- he said he wanted to avoid "dividing the nation" -- sparked cheers and celebrations that went late into the night.

Raluca, a demonstrator in her 30s, said that the government was still not to be trusted. "People are going to remain very vigilant," she told AFP late Saturday.

Her words were echoed on Sunday morning by Rado, one of a sweaty trio who had parked their bikes on the square and were peddling in place for exercise in lieu of heading out for their normal ride.

"Usually we do a Sunday trip, we cycle around 100-150 kilometres (60-90 miles)," said the 27-year-old who works for an online sports shop. "And since we have to look out for the thieves in our government, we decided just to come here and train," he told AFP. "We just want someone competent to run the state for the people. Not for themselves, for their own benefit and bank accounts."