Roman Kent, who reminded the world of the Holocaust, dies at 92 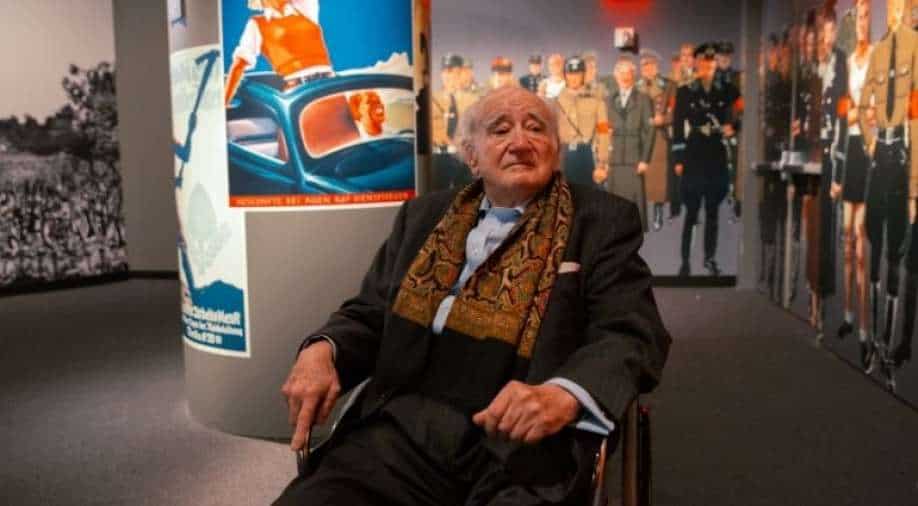 FILE -- Roman Kent is surrounded by Nazi propaganda posters while viewing an exhibition at the Museum of Jewish Heritage in New York on May 1, 2019. Kent, who as an orphaned teenager endured the horrors of Auschwitz and other hellish camps and later channeled his sorrow and rage into helping to lead an American movement to memorialize the Holocaust and provide reparations for aging Jewish survivors, died on Friday, May 21, 2021, at his home in Manhattan. He was 92. (Michael George © 2021 The New York Times) Photograph:(The New York Times)
Follow Us

Kent did not attend Michel’s world gathering of 6,000 survivors in Jerusalem in 1981, but he was so inspired by the event’s scale and impact that he helped organize succeeding convocations in Washington and Philadelphia

Roman Kent, who as an orphaned teenager endured the horrors of Auschwitz and other hellish camps and later channeled his sorrow and rage into helping to lead an American movement to memorialize the Holocaust and provide reparations for aging Jewish survivors, died Friday at his home in Manhattan. He was 92.

His death was confirmed by his daughter, Susan.

While many Holocaust survivors have chosen to stay quiet about their experiences or share them only with close friends and other survivors, Kent believed that the world needed to be reminded of the 6 million Jews who perished at the hands of the Germans and their collaborators, and that Germany needed to repay the remnants of European Jewry for what they suffered and whom they lost.

Elie Wiesel, with his eloquent speeches and vivid writings, compelled the world to recognize the enormity of what had happened and appealed for an end to silence and indifference in the face of persecution. A handful of others, like Benjamin and Vladka Meed, Ernest Michel, Josef and Hadassah Rosensaft, Sigmund Strochlitz, Sam Bloch, Norbert Wollheim and Kent did the painstaking work of galvanizing and organizing survivors into a movement.

“I didn’t want our past to become our children’s future,” Kent would often say.

Several times each year the survivors would gather in large numbers at cavernous temples or local arenas and, by their presence and the shattering power of their stories, remind the world of how it had stood by for years while millions of Jews were oppressed, humiliated and eventually slaughtered.

Kent did not attend Michel’s world gathering of 6,000 survivors in Jerusalem in 1981, but he was so inspired by the event’s scale and impact that he helped organize succeeding convocations in Washington and Philadelphia. Along the way, the American Gathering of Jewish Holocaust Survivors and Their Descendants was formed. Kent was its chairman at his death.

In 1988, he joined the board of the Conference of Jewish Material Claims Against Germany, which has negotiated most of the $80 billion that Germany has paid in assistance to survivors and for educational and memorial programs. He eventually served as the organization’s treasurer and co-chairman of its negotiating committee.

Stuart Eizenstat, a former deputy secretary of the treasury and the conference’s chief negotiator, said Kent had used his visceral knowledge of the enduring problems of survivors when prodding Germany to augment monthly pensions, provide $9 billion for survivors still living in the former Soviet Union and Iron Curtain countries, and, as survivors lived into their 90s, set aside $554 million for home care.

“I had some talent as a negotiator, but Roman was able to add that personal commitment, that drama, that passion,” Eizenstat said, “He understood the issues from the perspective of the survivor, which I couldn’t.”

Menachem Rosensaft, a second-generation Holocaust activist, said that Kent “had the ability to engage the German government officials and persuade them to go beyond their original commitments.”

At various times Kent was president of the International Auschwitz Committee, whose purpose is to inform the world about the horrors of Auschwitz-Birkenau, where 1.1 million people — almost 1 million of them Jews — were slaughtered in gas chambers or perished from hunger and disease. He also served as president of the Jewish Foundation for the Righteous, which provides aid to non-Jews who had hid Jews or helped them escape.

“He was not seeking revenge; he was seeking justice,” Ronald Lauder, president of the World Jewish Congress, who worked with Kent on Auschwitz remembrance efforts, said in a phone interview. “He was a person who looked to the future instead of the past.”

On a visit in 2019 to the Auschwitz exhibit at the Museum of Jewish Heritage in lower Manhattan, Kent seemed to explain his zeal for immersing himself so fully in Holocaust remembrance.

“How can I forget the smell of burning flesh that constantly filled the air?” he said in a trembling voice as tears rolled down his cheeks. “Or the heartbreak of children torn from their mothers? Those shouts of terror will ring in my ears until I am laid to rest.”

Roman Kniker was born April 18, 1929, in the manufacturing center of Lodz, Poland’s second largest city, with 600,000 people, one third of them Jews. His father, Emanuel, was a textile manufacturer, and his mother, Sonia (Lipszytz) Kniker, tended to the home and the four children, including Roman’s two older sisters, Dasza and Renia, and his younger brother, Leon.

The family lived comfortably, spending summers horseback riding and bicycling at a villa they owned 30 miles outside Lodz. Roman attended a private school for Jews with a Hebrew curriculum. When he walked past a public school he was often the target of slurs and sometimes stones. He and his brother spent much of their free time kicking a soccer ball in a courtyard in his father’s factory.

The German army invaded Poland on Sept. 1, 1939, and the occupiers confiscated the factory and the apartments across the street. Roman’s family squeezed into a small side building on the factory grounds. By the end of the year, they and the city’s other Jews were forced into a squalid ghetto that had no electricity, running water or medication, although in the early days gentile workers at his father’s factory slipped food to the family, Kent recalled in a video interview. Thousands succumbed to malnutrition, disease and cold temperatures. Among them was Roman’s father, who died in 1943.

The ghetto was emptied in the fall of 1944, its inhabitants crammed into cattle cars and deported to concentration camps, mainly the sprawling Auschwitz-Birkenau complex. When they arrived, Roman was separated from his mother and two sisters. He would never see his mother again.

Roman and Leon were assigned to a work detail and transferred to other labor camps to feed the ravenous industrial and military needs of the German army as it lost battle after battle. The brothers were interned in Gross-Rosen and Flossenburg, and from there forced at gunpoint on a death march to Dachau in Germany. They were liberated along the way by the U.S. Army in April 1945.

They searched for their relatives and learned that their mother had died at Auschwitz but that their sisters were alive in Sweden. The four siblings were briefly reunited, but Dasza, still sick from her wartime ordeal, died a few months later. Renia remained in Sweden and married there.

In the postwar years, when the American government was reluctant to lift immigration quotas, even for the 250,000 Jewish survivors who had been deported to concentration camps or otherwise displaced, Kent was among the first to enter the United States. He and Leon did so as a result of a special directive by President Harry S. Truman that admitted a few thousand orphans.

The brothers lived with foster families in Atlanta and attended Emory University. Leon studied medicine and became a neurosurgeon, while Kent studied business and started successful companies that imported cookware, dinnerware, guitars, hospital gowns and other products from Europe and China.

After Emory, the brothers moved to New York and simplified their last name to Kent. Roman met Hannah Starkman, a Lodz native who had survived three concentration camps, on a visit to the New York area; they married in 1957. They had two children, Jeffrey and Susan, who survive him, as do three grandchildren and one great-grandchild. Hannah Kent died in 2017.

Roman Kent was a vigorous supporter of Holocaust education, and in a speech he gave in 2015, on the 71st anniversary of the Lodz ghetto’s liquidation, he explained why. It was the obligation of adults, he said, to get children to understand “what happens when hatred and prejudice are allowed to flourish.”