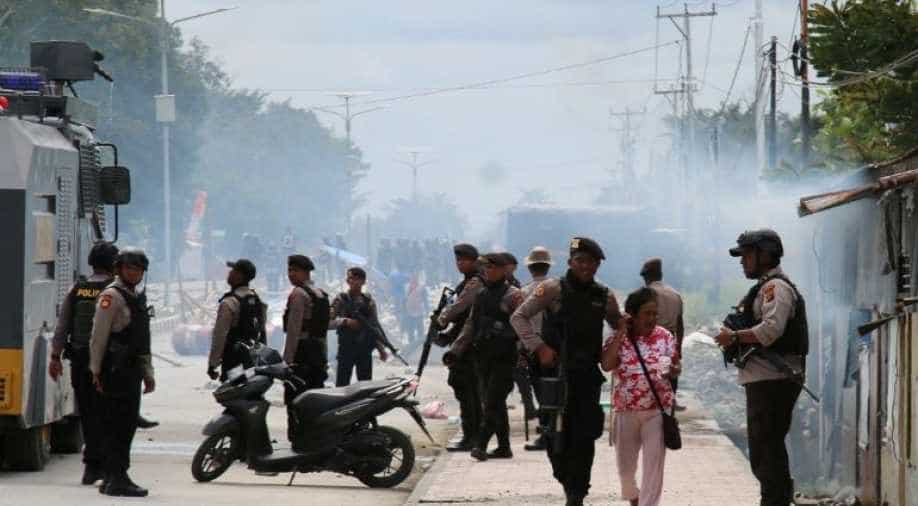 A police officer escorts a woman during a protest in Mimika, Papua, Indonesia. Photograph:( Reuters )

State power company PLN said the violence forced it to cut electricity in parts of Jayapura, a city of about 300,000 people.

Indonesia's Papua plunged into chaos again Thursday as angry protesters torched buildings in its capital after nearly two weeks of riots and demonstrations in the easternmost province of the archipelago.

More than a thousand demonstrators marched around Jayapura hurling stones and setting fire to shops and an assembly building following a deadly clash in another part of the jungle-clad province, which shares the island with independent Papua New Guinea.

Carrying placards bearing the image of a banned flag, many called for independence from Indonesian rule and an end to racism against the minority group.

Papuans are ethnic Melanesians and have few cultural ties with the rest of Indonesia.

State power company PLN said the violence forced it to cut electricity in parts of Jayapura, a city of about 300,000 people.

"Security forces are still trying to control the situation," he added.

The protest comes a day after violence flared in remote Deiyai, where a clash between protesters and Indonesian security forces left at least one soldier and two demonstrators dead, according to officials.

The confrontation sparked reports that Indonesia's military -- long accused of committing rights abuses against Papuans during a decades-old separatist insurgency -- had gunned down six protesters.

Authorities denied that claim and said they were attacked by hundreds of Papuans armed with machetes and traditional bows-and-arrows.

Some 300 extra personnel had been sent to Deiyai to restore order, officials said Thursday, after Jakarta deployed more than 1,200 police and military members to Papua last week.

The accounts of what happened in Deiyai could not be independently verified.

Conflicting reports are common in Papua, where independence supporters and the military frequently blame each other for violence.

Riots and demonstrations have broken out in Papua since mid-August with buildings torched and street battles between police and protesters.

The unrest appears to have been triggered by the arrest this month of dozens of Papuan students in Java, who were also racially abused.

Police in riot gear stormed a dormitory in the city of Surabaya to force out students accused of destroying an Indonesian flag, as a group of protesters shouted racial slurs at them, calling them "monkeys" and "dogs".

One person suspected of organising the protest against the Papuan students in Surabaya had been named a criminal suspect, while a half dozen police officers have also been temporarily suspended pending an investigation.

Jakarta took control of Papua, a former Dutch colony, in the 1960s after an independence referendum widely viewed as a sham.

Despite a push to develop its infrastructure, many Papuans say they're treated like second-class citizens and have not received a fair share of vast mineral wealth in a region home to the world's biggest gold mine.

"This is the culmination of years of assuming that roads and money were the keys to addressing Papuan grievances," said Sidney Jones, director of Jakarta-based Institute for Policy Analysis of Conflict (IPAC).

"The accusations of racism came on top of what was already smouldering anger," she added.