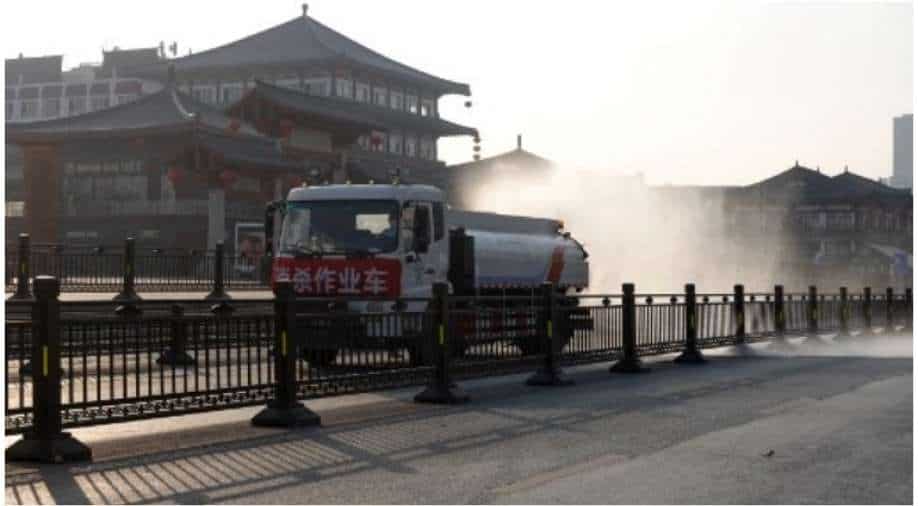 A truck sprays disinfectant on street in Xi'an in China's northern Shaanxi province on December 31, 2021, amid a Covid-19 coronavirus lockdown. Photograph:( AFP )

Images on social media are reportedly showing residents swapping supplies and even tech gadgets in exchange for food. City of Xian is under lockdown since December 23, 2021

Worries of food shortages have led to some residents of Xian, the Chinese city under Covid lockdown resorting to barter to secure essential supplies, as per BBC.

Images on social media are showing residents swapping supplies and even tech gadgets in exchange for food, the report said.

The city has seen a COVID-19 resurgence and about 13 million citizens have been forced to stay indoors sinche December 23, 2021

In recent days many have taken to social media with numerous complaints.

Authorities have been providing free food to households, but some have said their supplies are running low or that they had yet to receive aid.

Videos and photos on social media site Weibo showed people exchanging cigarettes for cabbage, dishwashing liquid for apples, and sanitary pads for a small pile of vegetables, the report said.

One video showed a resident appearing to trade his Nintendo Switch console for a packet of instant noodles and two steamed buns.

"Helpless citizens have arrived at the era of bartering - potatoes are exchanged for cotton swabs," one Weibo user said, while another described it as a "return to primitive society".

Xi'an is at the epicentre of China's current Covid outbreak, and local authorities have enacted drastic measures which have attracted significant criticism online.

On Tuesday, authorities moved to put a second city into full lockdown after the detection of three asymptomatic cases.

Around 1.1 million residents in Yuzhou, a city located 500 km away from Xi'an, will now have to stay in their homes.