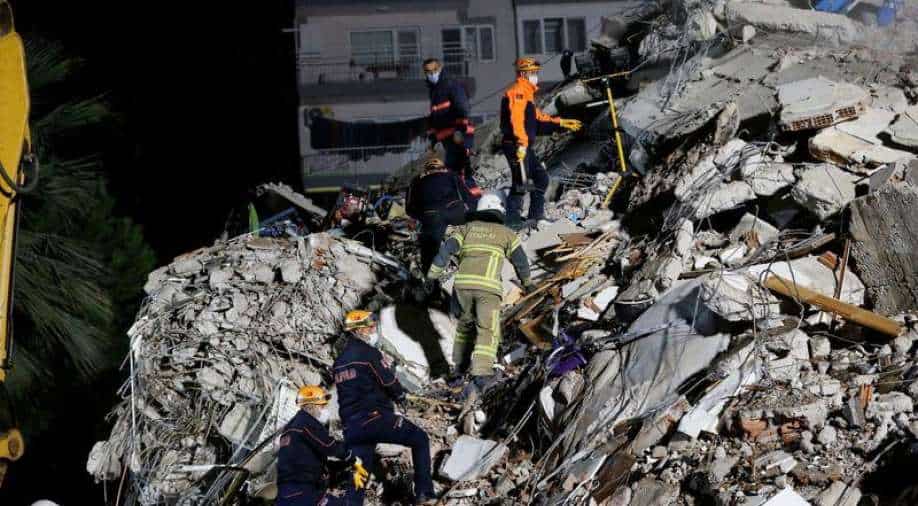 The rubble after the earthquake Photograph:( Reuters )

Overnight, 33 hours after the quake, a 55-year-old man named by state news agency Anadolu as Ahmet was pulled out from underneath the rubble to applause of onlookers and taken to hospital.

Rescue teams continue to plough through concrete blocks and the debris of collapsed buildings on Sunday in search of survivors of a powerful earthquake that struck Turkey’s Aegean coast and north of the Greek island of Samos on Friday.

The death toll is on a rise -- with multiple reports saying at least 49 people have died.

More than 800 people were injured from the earthquake that toppled buildings in Izmir, Turkey’s third-largest city, and triggered a 'mini' tsunami in the district of Seferihisar and on Samos.

As many as 200 people, or maybe more, were in hospital, AFAD said, and rescuers were still searching eight buildings in Izmir.

Nearly 6,000 rescuers from different agencies and cities worked together to reach survivors, at times hushing the crowds to listen into the rubble with sensitive headphones and crawling through the cracks.

Overnight, 33 hours after the quake, a 55-year-old man named by state news agency Anadolu as Ahmet was pulled out from underneath the rubble to applause of onlookers and taken to hospital.

Two other women, aged 53 and 35, were brought out from the rubble of another toppled two-story building earlier on October 31.

Turkish President Recep Tayyip Erdogan said Saturday that 103 people have been rescued from the quake's rubble. It was unclear how many more people were trapped under buildings that were levelled.

Turkey’s Disaster and Emergency Management Presidency, or AFAD, said 885 people were injured in Izmir and three other Provinces. The health minister said eight people were being treated in intensive care, with three of them in critical condition.

The small tsunami that hit the Turkish coast also affected Samos, with seawater flooding streets in the main harbour town of Vathi.

The earthquake, which the Istanbul-based Kandilli Institute said had a magnitude of 6.9, was centred in the Aegean northeast of Samos. AFAD said it measured 6.6. and hit at a depth of some 16 km.

The United States Geological Survey (USGS) measured the tremor's magnitude at 7.0 -- at a relatively shallow depth of 21 kilometers (13 miles), the USGS reported, making its impact powerfully felt at ground level around the epicentre.

It was felt across the eastern Greek islands and as far as Athens and in Bulgaria. In Turkey, it shook the regions of Aegean and Marmara, including Istanbul.

Authorities warned residents in Izmir not to return to damaged buildings, saying they could collapse in strong aftershocks.

Turkey has reported more than 800 aftershocks following the quake, including 40 that were above four in magnitude.

Tensions between the two nations have flared recently over energy claims in the eastern Mediterranean.

But despite this, Greek Prime Minister Kyriakos Mitsotakis said Friday that he had spoken to his Turkish counterpart and offered his condolences.

"Whatever our differences, these are times when our people need to stand together," Mitsotakis wrote on Twitter.

In a tweet, the Turkish president offered his condolences to Greece and said "that two neighbors show solidarity in difficult times is more valuable than many things in life."

According to Erdogan, both Turkey and Greece were ready to send aid to the other.