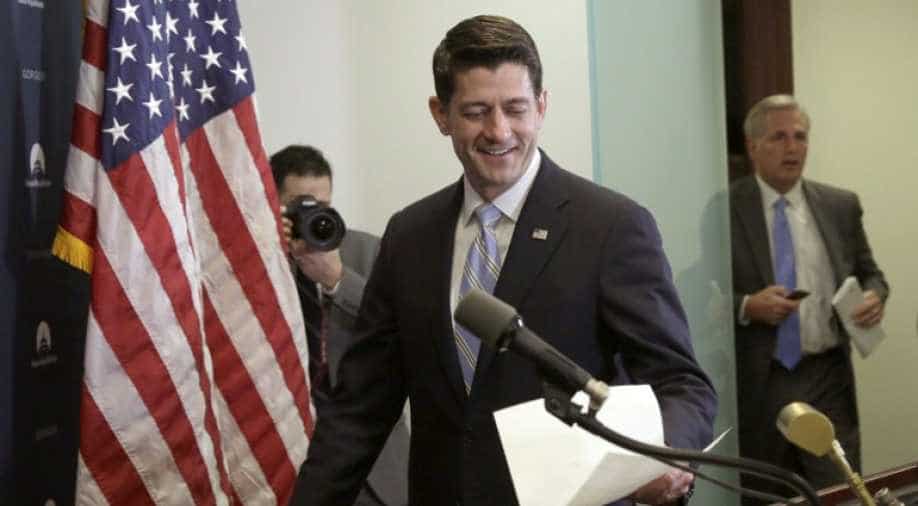 Ryan who was critical of Trump, is backing the President-elect after last weeks polls saying 'We're on the same page with our president.' Photograph:( AFP )

Republican members of the US house of representatives on Tuesday unanimously chose Paul Ryan to keep his job as Speaker, following the party's victory at the polls last week, the House GOP conference announced.

"It is a tremendous honor to be nominated by my colleagues to serve as Speaker of the House. Now it's time to go big," Ryan, a 46-year-old lawmaker from Wisconsin, tweeted after the closed-doors vote at the Capitol.

Democrats and Republicans will formally vote to elect the chamber's speaker after newly-elected lawmakers take up their seats on January 3.

Given that the Republicans maintain their majority in the House, Ryan's re-election as speaker is essentially a foregone conclusion -- unless another Republican decides to mount a surprise challenge between now and then.

On the Democratic side, internal divisions have delayed the election of a party leader in the House until November 30.

The role is currently held by Nancy Pelosi, 76, but she may face a challenge from the party's young guard, in the person of 43-year-old Ohio lawmaker Tim Ryan.

The Republican majority in both the House and Senate is expected to clear the way for President-elect Donald Trump to roll out much of his conservative agenda unfettered.

In a sign that the party leadership's resistance to the maverick billionaire has all but disappeared, House Republicans assembling for the internal vote were each given one of Trump's trademark red "Make America Great Again" baseball caps.

Ryan himself -- who kept his distance and on several occasions criticised Trump during the White House campaign -- has swung firmly behind the 45th US president, who will take office on January 20.

"Seventy perc ent of the people in this nation think America is going down the wrong path," Ryan told a news conference on Tuesday morning.

"They now just said, get on a better way, a better path. That's our job. Not to look backwards but to look forward."

Trump and the Republicans appear to be in broad agreement on a roadmap that includes replacing President Barack Obama's trademark health care law, building a wall -- or fence -- on the Mexican border, and slashing taxes.

"We're on the same page with our president-elect," Ryan said. "I talked with Donald Trump virtually every single day."

Definitive results from last Tuesday's election have yet to come in, but Republicans are assured of holding at least 239 seats in the House of Representatives, against 193 for Democrats, and at least 51 of 100 seats in the Senate.