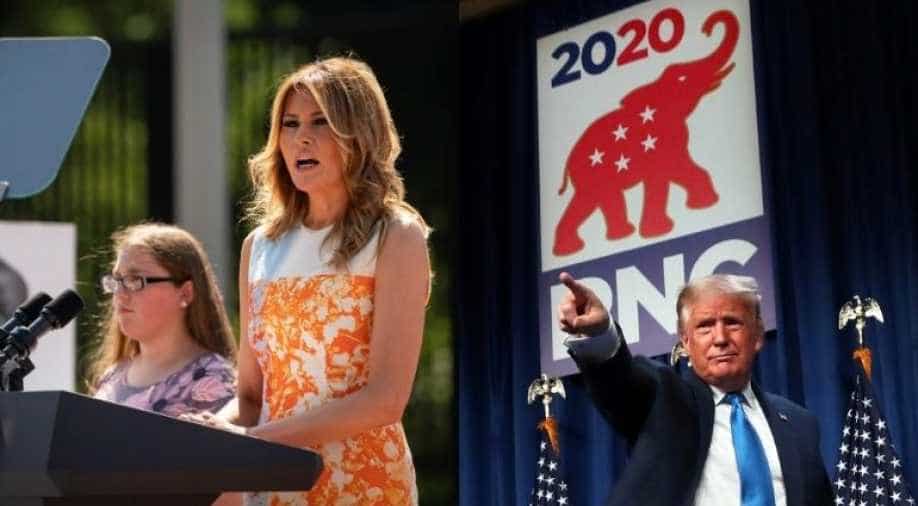 First lady Melania Trump and US Secretary of State Mike Pompeo will highlight the program in speeches that have drawn complaints from Democrats for using the White House and a diplomatic trip for partisan purposes.

Republicans pressed their case on Tuesday for US President Donald Trump's re-election over Democrat Joe Biden, arguing as their convention opened for a second day that Trump's leadership was vital to the country's economic and political future.

First lady Melania Trump and US Secretary of State Mike Pompeo will highlight the program in speeches that have drawn complaints from Democrats for using the White House and a diplomatic trip for partisan purposes.

Also see: Takeaways from the first night of the Republican National Convention

Hours before Republicans reconvened, the president issued a pardon to a convicted Nevada bank robber, Jon Ponder, who has become an advocate for other inmates and will speak to the convention on Tuesday.

"Jon's life is a beautiful testament to the power of redemption," Trump said in a video.

Also speaking will be Richard Beasley, the FBI agent, now retired, who arrested Ponder in 2004. They are among an array of Americans to testify that Trump's policies have helped them.

"I strongly support President Trump’s re-election. When he sees something isn't right, he’s fearless in fixing it. He listens to working people," Maine lobsterman Jason Joyce was expected to say, according to advance excerpts.

Other Americans speaking in defense of Trump's policies on Tuesday had been expected to include Mary Ann Mendoza, whose police officer son died in a head-on collision with a drunk driver who was in the country illegally. She was pulled from the program after retweeting an anti-Semitic conspiracy theory. She later apologised.

Also scheduled to make the case for Trump against his Democratic rival Joe Biden include Trump's son, Eric, and daughter, Tiffany, as well as Iowa Governor Kim Reynolds and US Senator Rand Paul of Kentucky.

On Monday, the opening day, Republicans painted a dire portrait of a future America under Biden's leadership, with Trump campaign adviser Kimberly Guilfoyle asserting that Democrats want to "destroy this country."

The tone drew complaints from Democrats who said Trump was to blame for mismanaging the coronavirus outbreak that has killed more than 177,000 Americans - more than any other country in the world - and thrown millions out of work.

Adding to the dark picture, parts of Kenosha, Wisconsin, were smoldering after another night of unrest sparked by the shooting of a Black man by police. The man, who remains in intensive care, was shot in the back.

Biden leads in the polls

With 70 days remaining until the November 3 election, Biden, 77, who served as vice president under Barack Obama, leads Trump, 74, in opinion polls. Democrats nominated Biden to challenge Trump at their party's convention last week.

A total of 17 million people watched the Republican convention's first night on Monday, according to Nielsen, fewer than the 19.7 million TV viewers who watched the first night of the Democratic National Convention last week.