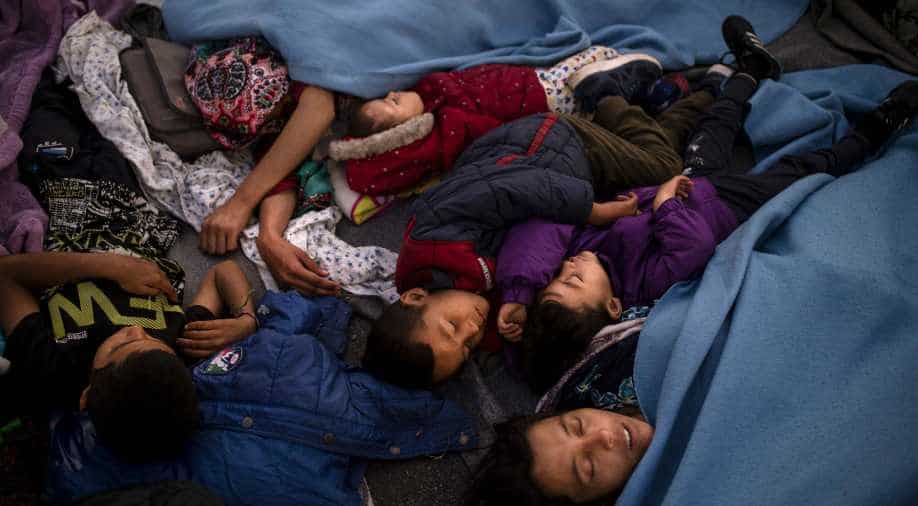 The woman, a 27-year-old who is eight months pregnant, lives at a temporary camp with her husband and three children

An Afghan woman is facing arson charges after trying to burn herself to death at a migrants camp on the Greek island of Lesbos this week, officials said Thursday.

The charges are the latest in a series of punishments directed at refugees and asylum-seekers on the island, rights groups say, and reflect the Greek government’s hard line on migrants. The episode is also a stark example of the effect that the dire conditions at Greek reception centers have on refugees’ mental health.

The woman, a 27-year-old who is eight months pregnant, lives at a temporary camp with her husband and three children. She set her tent alight Sunday after being told that her family’s planned relocation to Germany was being postponed, a Greek migration ministry official said, noting that her journey had been delayed because of the advanced state of her pregnancy.

“She tried to commit suicide by setting fire to her tent and sitting inside it,” a Lesbos fire service official said, speaking on the condition of anonymity.

The woman was hospitalized with non-life-threatening burns after neighbors dragged her from the burning tent, the officer said, adding that no one else was injured.

Thousands of people are living in desperate conditions at Greece’s camps for refugees and migrants dotted along its islands, a situation that human rights groups consistently denounce as inhumane. Groups have long warned of a growing mental health crisis there as the thousands who fled war and economic hardship remain in limbo.

Although the number of migrants crossing the Aegean by boat from Turkey to the Greek islands has dropped sharply this year — by more than 90% in January, according to authorities — the camps remain crowded. Dozens of facilities on the mainland have been closed as part of a government policy to discourage further arrivals.

And although the processing of asylum claims has been accelerated since last year, a significant backlog remains.

In the case of the woman on Lesbos, her asylum application had been approved and refugee status granted, and her desperate act appeared to have been prompted by the delay in her relocation to Germany. The makeshift camp, like other facilities nationwide, remains locked down because of the pandemic.

The woman, whose name was not released by authorities, arrived in Greece in 2019 and had been living in a camp on the island for more than a year, according to the migration ministry. She was due to give a statement to a court official and the prosecutor from her hospital bed Thursday, officials said.

A spokesman for Greek police said that although her treatment may appear harsh, her actions could not go unpunished, because instances of arson are frequent and put other camp residents at risk.

“The law has to be enforced. A message has to be sent,” said the spokesman, Theodoros Chronopoulos. “This could have created a larger fire.”

The incident occurred inside a temporary camp that was set up after a series of fires destroyed the sprawling Moria camp in September. Six Afghan migrants were charged with arson in connection with that fire and are awaiting trial.

Eva Cossé, a Western Europe researcher for Human Rights Watch, said it was hard to overstate the toll that such conditions take on people in the camps.

“The psychological impact of years of conflict, exacerbated by harsh conditions on the Greek islands and the uncertainty of inhumane policies, may not be as visible as physical wounds,” she said. “But as this case shows, it is no less life-threatening.

“The impulse to prosecute her rather than help her,” Cossé added, “is not only emblematic of what is wrong with Europe’s approach to migration, but it also shows Greece’s lack of compassion and humanity.”

In recent months, rights groups have denounced Greek authorities’ increasingly tough actions regarding migrants. In November, an Afghan man was charged with endangering the life of his son after the 6-year-old drowned off the coast of another Aegean island when their boat traveling from Turkey capsized. The man has since been granted asylum but is still awaiting trial, according to his lawyer.

Last week, Notis Mitarachi, Greece’s migration minister, said authorities were pressing forward with efforts to accelerate asylum applications and the return of migrants to Turkey in a bid to ease overcrowding in camps and discourage further arrivals.

He noted that the number of asylum-seekers at facilities nationwide had dropped to just over 60,000 from nearly 100,000 early last year, while 57 facilities on the mainland have been closed entirely.

“We are continuing with the implementation of a tough but fair migration policy so that our country is no longer a gateway to Europe for illegal smuggling rackets,” he said.