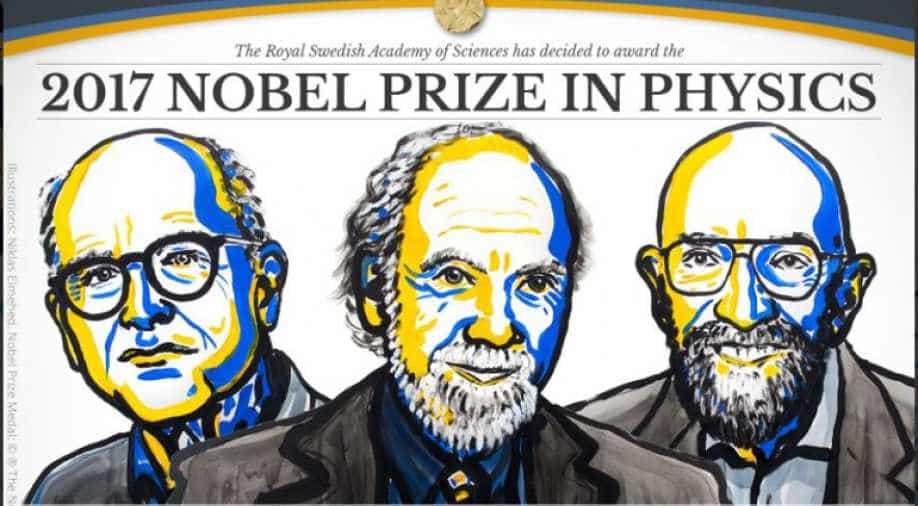 Here is a list of the 10 most recent Nobel Physics Prize winners, after the 2017 prize was awarded on Tuesday to three US astrophysicists for the discovery of gravitational waves.

2017: Barry Barish, Kip Thorne and Rainer Weiss for the discovery of gravitational waves, a phenomenon predicted by Albert Einstein a century ago as part of his theory of general relativity.

2016: David Thouless, Duncan Haldane and Michael Kosterlitz (Britain) for their study of strange phenomena in unusual phases, or states, of matter, such as superconductors, superfluids or thin magnetic films.

2015: Takaaki Kajita (Japan) and Arthur McDonald (Canada) for their work on neutrinos.

2014: Isamu Akasaki (Japan), Hiroshi Amano (Japan) and Shuji Nakamura (US) for their work on LED lamps.

2013: Peter Higgs (Britain) and Francois Englert (Belgium) for their work on the so-called Higgs boson, a subatomic particle that gives mass to other particles.

2011: Saul Perlmutter, Adam Riess (US) and Brian Schmidt (US-Australian) for discovering the accelerating expansion of the universe.

2008: Makoto Kobayashi, Toshihide Maskawa (Japan) and Yoichiro Nambu (US) for discovering the mechanism of spontaneous broken symmetry in subatomic physics.