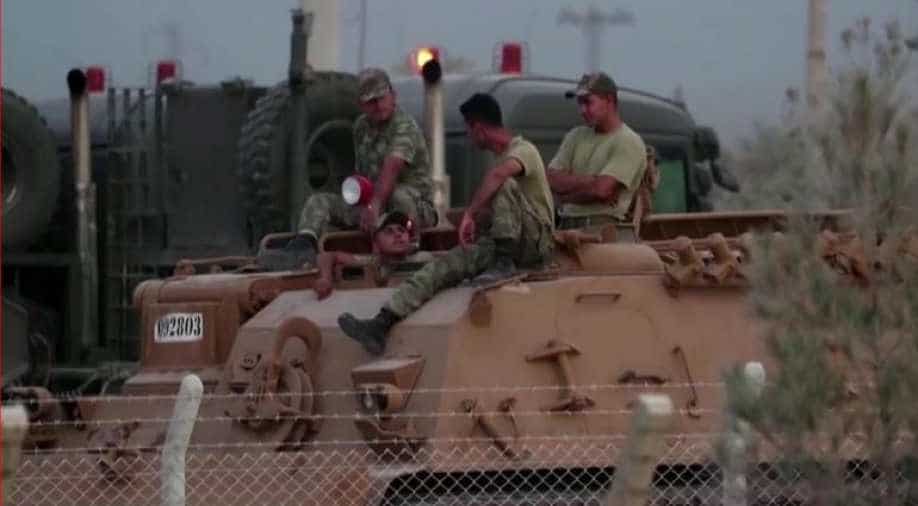 The group recently rebranded itself as the Syrian National Army (SNA), under the authority of the opposition's "interim government" in exile, based in Turkey.

In the vanguard of Syrian revolt before being ripped apart by division and indiscipline, the Free Syrian Army has returned as a key component of Turkey's offensive against Kurdish militants.

The broad-ranging coalition styled itself as the moderate force against Syrian President Bashar al-Assad but lacked the funding and support to compete with extremist groups such as Al-Nusra and the Islamic State (IS) when they emerged around 2012.

Having all but disappeared for several years, the Free Syrian Army regained the spotlight in 2016 when it participated alongside Turkish forces in Ankara's first incursion into northern Syria against IS.

But images of FSA fighters posing with mutilated bodies of Kurdish militants and looting stores during a second Turkish operation in Afrin two years later undermined their reputation for moderation.

The group recently rebranded itself as the Syrian National Army (SNA), under the authority of the opposition's "interim government" in exile, based in Turkey.

They are armed, trained and paid by Ankara, and once again joined Turkish soldiers this week as part of "Operation Peace Spring", launched on Wednesday against Kurdish forces in northeastern Syria.

"The Syrian National Army is the indigenous component of the Turkish operation. It's an important infantry force for the offensive," said Emre Kursat Kaya, of the EDAM think-tank in Istanbul.

"The group is formed around Sunni Arab and Turkmen fighters who are locals of the region. Thus, their presence in the operation provides an undeniable intelligence advantage."

The SNA now claims to have some 80,000 men at its disposal, having boosted its ranks earlier this month by integrating another coalition, the National Liberation Front, based primarily in Idlib province.

Some 14,000 of its fighters have been mobilised for the new operation, according to the group's spokesman, Major Yusuf Hamoud.

"That number can increase as the battle unfolds," he told AFP.

A large number of these fighters come from areas targeted by the Turkish offensive, he said, which is aimed at pushing back the Kurdish People's Protection Units (YPG) militia.

"These soldiers were forced to leave when the YPG took control" of territories such as Tal Abyad and Ras al-Ain, he added.

Turkey has so far deployed around 1,000 SNA soldiers in the Tal Abyad and Ras al-Ain areas, estimates Charles Lister, of the Middle East Institute.

"For now, the SNA appears to be operating under the tight control of the Turkish military and Ankara is using them as the primary force," he told AFP.

Lister said this mirrored the way that the US had used the Kurdish-led Syrian Democratic Forces in their battle against the Islamic State group.

"Their role is crucial for now," Lister said. "Turkey's strategy is not just to train these forces, but to give them sufficient operational experience so that once territory is captured they will operate as capable hold-forces wholly loyal to Ankara."

The challenge now will be to ensure that there is no repeat of the rights violations seen during their last deployment in Afrin.

The United States has warned Turkey that any abuses will result in severe economic sanctions.

In a statement published on Saturday, the SNA's "chief of staff" called on all commanders in the field "permanently supervise fighters on the frontline to prevent any violations or abuses."

Kaya, of the EDAM think-tank, believes Turkey will have taken measures to minimise these risks.

"These forces have been intensively trained by Turkish forces for this operation," he said.

"Turkey chose the most professional Syrian moderate forces to participate in this operation. We should also mention that elite Turkish commando forces on the ground will supervise the offensives and react to any excesses," he added.