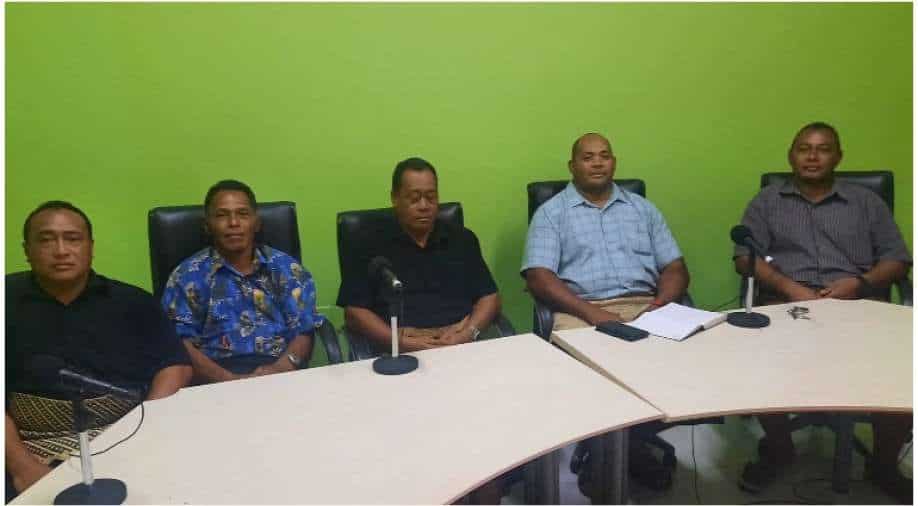 Lisala Folau, (second from left) a Tongan man who says he swam for around 27 hours after getting swept by tsunami, sits in Nuku''alofa Photograph:( Reuters )

Lisala Folau, who lived on the small, isolated island of Atata which has a population of about 60 people, was swept out to sea at 7 pm on Sunday. He floated helplessly due to sheer force of waves but latter swam for 7.5 kilometres to reach the shore

A 57-year-old Tongan man is being hailed as 'real-life Aquaman' after he said he swam for 27 hours to reach the shore after a tsunami triggered by violent explosion of Hunga Tonga-Hunga Ha`apai volcano on the Southern Pacific island nation.

The volcanic explosion sent tsunami waves rolling across the archipelago, damaging villages, resorts and many buildings and knocked out communications for the nation of about 105,000 people.

Lisala Folau, who lived on the small, isolated island of Atata which has a population of about 60 people, was swept out to sea when the waves hit land at about 7 pm on Saturday, he said in a radio interview to Tongan media agency Broadcom Broadcasting.

Folau said he was painting his home when he was alerted about the tsunami by his brother, and soon the waves had gone through his lounge.

He climbed on a tree to escape but when he got down another big wave swept him away, he said. The 57-year-old said he is disabled and cannot walk properly.

"I just floated, bashed around by the big waves that kept coming," he told the radio station.

Folau said he kept floating, and slowly managed to swim 7.5 km (4.7 miles) to the main island of Tongatapu, reaching the shore 27 hours later at about 10 p.m. on Sunday.

The story of Folau`s heroics went viral among Tongan groups on Facebook and other social media.

Atata, which is about 8 km northwest of Tonga’s capital Nuku`alofa, or a 30-minute boat ride, has been almost entirely destroyed in the tsunami that hit the islands. Tongan naval boats are still surveing the smaller islands and evacuating people to the main islands.