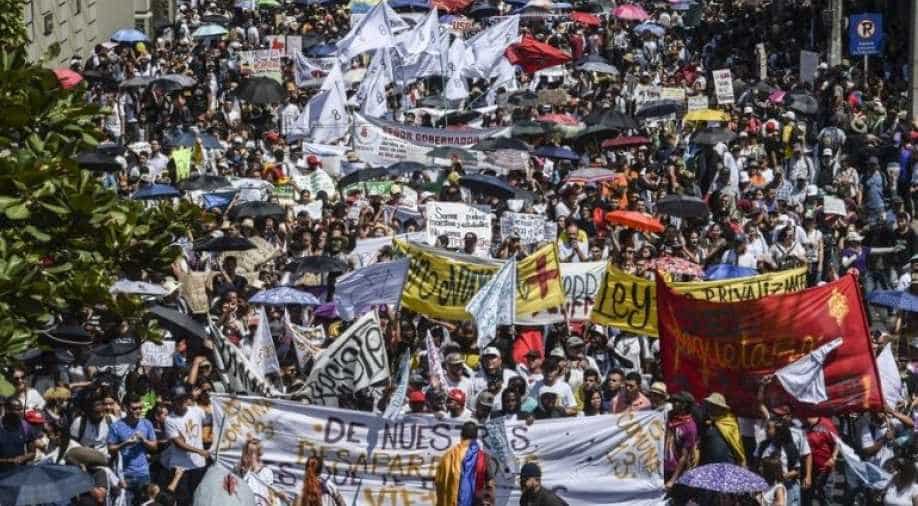 The protests, which are entering their 12th consecutive day, have drawn anywhere from hundreds to several thousand people

The Colombian government said Monday it is prepared to meet with leaders of the anti-government protest movement but asked they cancel a national demonstration scheduled for Wednesday.

The protests, which are entering their 12th consecutive day, have drawn anywhere from hundreds to several thousand people who often bang pots and pans as they demand right-wing president Ivan Duque change his policies.

"We are ready to meet with them this afternoon or tomorrow to discuss" their complaints, Diego Molano, a senior official in Duque's government-appointed to lead the government's negotiations, told reporters.

The National Strike Committee, which groups unions, students, university lecturers and indigenous groups, had in an open letter called on Friday for an "inclusive, democratic and effective dialogue," while also vowing to continue protesting Duque's announcement of a "national dialogue" earlier last week.

Molano asked protest leaders to cancel plans for a December 4 demonstration in an attempt to reduce the protests' effects on pre-Christmas commercial activity.

"We tell the National Strike Committee that President Duque's government is fully prepared to engage in dialogue, without an ultimatum, without pressure, for the good of Colombia," he said.

Protest organisers have yet to respond to his demand.

The committee has called for two other national demonstrations since the November 21 launch of Duque's national dialogue, while not associating itself with the smaller daily demonstrations in major cities Bogota, Medellin or Cali.

Strike leaders had previously met with Duque's government on November 26, where they presented the president with a list of 13 demands, including the withdrawal of his proposed tax reforms, and full compliance with the 2016 peace deal with FARC guerrillas.

But perhaps the most controversial is the call to dismantle the feared ESMAD riot police, after the death last week of 18-year-old protester Dilan Cruz, who was hit in the head by a tear gas canister.

Duque has yielded to some of the demands on tax reform, announcing the refund of Value Added Tax to the poorest 20 per cent of the population and benefits for companies that hire young people.

Colombia is the fourth-largest economy in Latin America and also one of the most socially unequal countries on the continent.