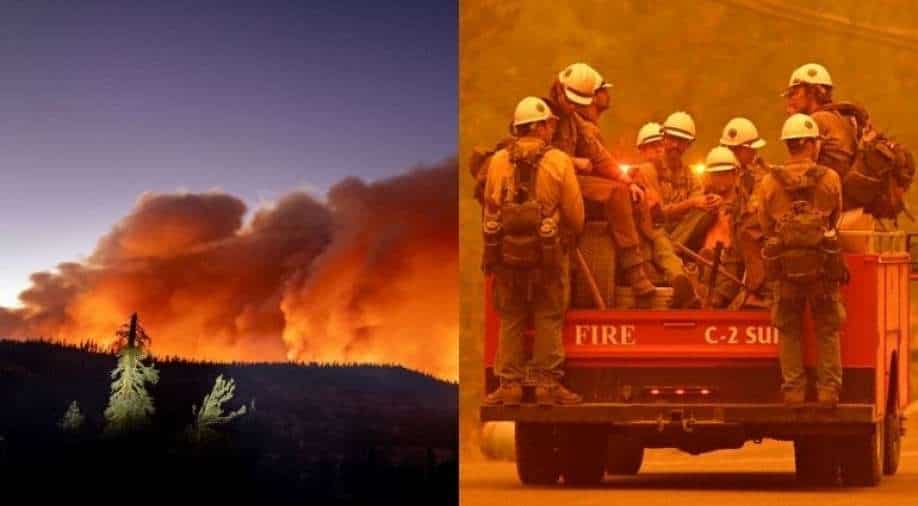 Fire and smoke push into the Lake Tahoe region during the Caldor fire near Tragedy Springs, California  Photograph:( Agencies )

Evacuation orders have been issued for several areas, including a portion of El Dorado County south of Lake Tahoe

Thousands of residents and tourists in communities near popular US tourist spot Lake Tahoe have fled as the Caldor fire roared closer.

Pushed by strong winds, the Caldor Fire crossed two major highways and burned mountain cabins as it swept down slopes into the Tahoe Basin.

More than 15,000 firefighters are battling dozens of California blazes, with help from out-of-state crews.

Dry fuel and up-slope canyon winds helped fan the fire over almost 10,000 more acres since Sunday, according to the California Department of Forestry and Fire Protection (Cal Fire).

Evacuation orders have been issued for several areas, including a portion of El Dorado County south of Lake Tahoe. The lake borders Nevada and is a beloved area in which to swim, hike and camp.

Evacuations were ordered for all of South Lake Tahoe, which has approximately 22,000 residents. First responders went door to door urging people to leave, and local jails were also emptied, the California Office of Emergency Services said.

The Caldor fire has damaged 39 residential, commercial and other structures while destroying over 472 so far. The fire has also led to five injuries to firefighters and civilians, according to the department's website.

The western United States is burning at an alarming rate, with over 2,700 square miles blackened by late August in California alone, more than double the area consumed by this time in an average year.

The fires are being driven by a historic drought that has left swathes of the region parched, as man-made climate change takes a visible, and painful toll and people living in the area are forced to flee.

California, which typically has experienced its peak fire season in late summer and fall, is already on pace to see more of its landscape go up in flames this year than last, the worst year on record.