Race to replace Theresa May leaves Brexit in limbo 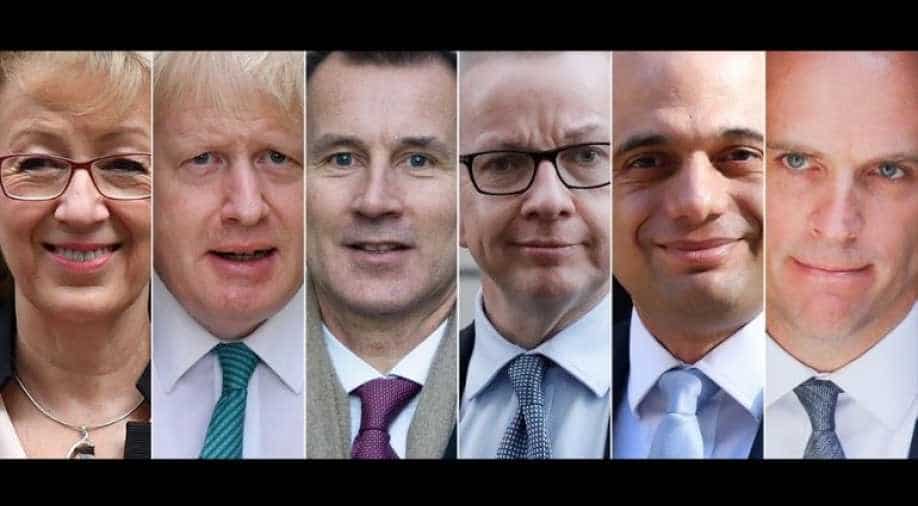 File photo of six main contenders to replace Britain's Prime Minister Theresa May when she resigns on June 7. Photograph:( AFP )

A tearful May announced her resignation on Friday, leaving the Brexit process for exiting the European Union in limbo and raising the risk of Britain crashing out of the bloc in a few months.

Contenders to succeed Theresa May as Britain's prime minister prepared to launch their leadership campaigns on Saturday, leaving Brexit shrouded in uncertainty.

A tearful May announced her resignation on Friday, leaving the Brexit process for exiting the European Union in limbo and raising the risk of Britain crashing out of the bloc in a few months.

May's statement inevitably triggered the starting gun on a two-month contest to replace her.

May will step down as Conservative leader on June 7 but stay on as prime minister until party members have chosen her successor, which will happen by July 20.

Britain's EU departure date is currently fixed for October 31, although any new leader could ask for a further delay.

Both have embraced the prospect of a no-deal Brexit.

But whoever takes over from May will like her face the same razor-thin majority in parliament, an EU with no intention of changing the divorce offer that MPs have rejected three times, and proponents both for and against Brexit who will never compromise.

That too would be a risky move, with the newly-formed, single-issue Brexit Party set to triumph in the European Parliament elections when the results become clear on Monday.

Waiting in the wings

Raab as well as Foreign Secretary Jeremy Hunt and Environment Secretary Michael Gove all held off from throwing their hats in the ring on Friday, but are widely expected to stand.

The next prime minister of the UK, a country of more than 66 million people, will be decided by the 100,000 or so paid-up members of the Conservative Party.

After Johnson and Raab, the next most likely winners are Gove, Hunt and former Commons leader Andrea Leadsom, bookmakers say.

So far, only Johnson, Stewart and former pensions minister Esther McVey have declared their intention to stand.

"There's a lot of runners and riders in this particular race," Tony Travers, a politics professor at the London School of Economics University, told AFP.

Johnson "would certainly be the party membership's choice but not necessarily members of parliament", he added.

With the House of Commons' arithmetic unchanged, "the question is, could a new prime minister go back to the EU 27 and get a different deal that would be more attractive to parliament," Travers said.

A snap YouGov poll of 2,200 adults on Friday found 67 per cent thought May had made the right choice in standing down.

At the same time, May told her local party branch that she would stay on in parliament and remain an MP.

Labour MP Chris Bryant, calling for a second Brexit referendum, said the new prime minister could not go for a no-deal Brexit.

"If they opt for confrontation, they will suffer Mrs May's fate, but in a matter of months and weeks, not years," he said.

In an emotional address outside her Downing Street Office on Friday, May ended a dramatic three-year tenure of near-constant crisis over Brexit.

May, who took charge in the aftermath of the 2016 Brexit referendum, was forced out following a Conservative mutiny over her ill-fated strategy to end Britain's near five-decade membership of the EU.

"It is and will always remain a matter of deep regret to me that I have not been able to deliver Brexit," said May.

"I will shortly leave the job that it has been the honour of my life to hold.

"I do so with no ill-will, but with enormous and enduring gratitude to have had the opportunity to serve the country I love," she said, her voice breaking and close to tears.

May was hastily pushed into the humiliating spectacle after a meeting with the Conservative Party's committee chief in charge of leadership elections.

Her fourth bid to get MPs to agree to her EU divorce deal, this time with changes seeking to woo the opposition, went too far for many key cabinet members and her last remaining authority had all but evaporated.

With her resignation, the manner of Britain's withdrawal from the EU appears more ambiguous than ever.