Race on as Merkel opens path for succession 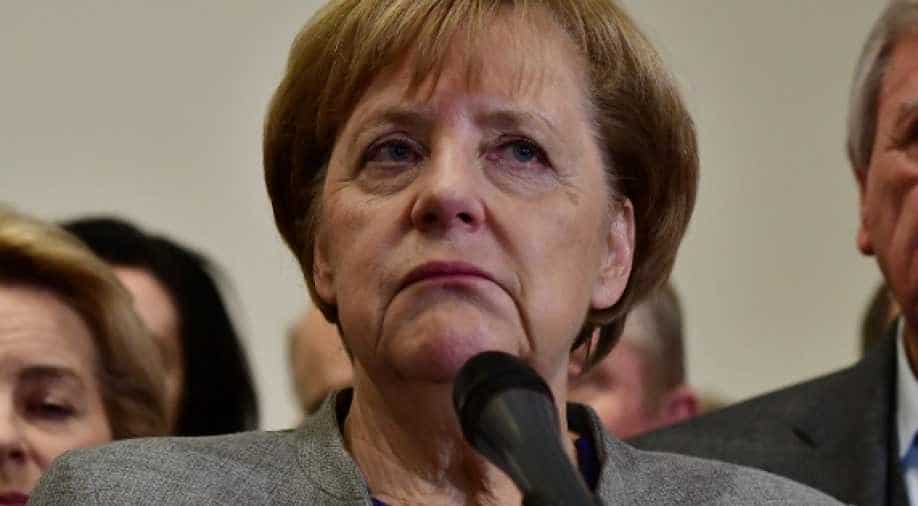 'The German Government does not support this position because the status of Jerusalem is to be resolved in the framework of a two-state solution,' Merkel`s spokesperson tweeted. Photograph:( AFP )

Merkel on Monday said she would not stand for re-election in December as leader of her centre-right CDU party, but that she planned to see out her fourth term as chancellor.

Angela Merkel's bombshell announcement of her plans to step down as German chancellor in 2021 has unleashed a succession race that will be watched closely within Germany and beyond.

Merkel on Monday said she would not stand for re-election in December as leader of her centre-right CDU party, but that she planned to see out her fourth term as chancellor.

The transition period set by Merkel is, however, a long time in politics, and even CDU heavyweights are publicly raising doubts on whether she would be able to hold on to power until the end of her mandate.

"There are three years to go in the legislature period. We will see if that will really be the case," Wolfgang Schaeuble, Bundestag president and former finance minister, told Deutsche Welle public broadcaster.

"She is today no longer as strong as perhaps at the peak of her successful time, that's obvious going by the vote results," added Schaeuble.

National media also noted that the Merkel era might be over sooner than expected.

"Whether Merkel will really govern as chancellor until 2021 and then leave politics as promised, or whether the events would suddenly become uncontrollable for her, that's no longer up to her alone," said news weekly Der Spiegel.

- Sharks are circling -
A key determining factor would be who ends up taking over from the veteran chancellor, in power for 13 years and at the helm of her party for 18.

After she outlined her intentions to party top brass, three candidates reportedly indicated their plans to stand for the job, including CDU general secretary Annegret Kramp-Karrenbauer, health minister Jens Spahn and former chief of the party's parliamentary group Friedrich Merz.

Another name touted by German media is Armin Laschet, who is also the state premier of Germany's most populous region North Rhine-Westphalia.

Laschet said Monday he has not declared his candidacy as it was "more important at this time to reflect, to see what (Merkel's departure) means for the party and how the party can be kept united".

"If Merkel's favourite Annegret Kramp-Karrenbauer wins in December, then Merkel's chances at staying in power are good," noted Spiegel.

But if a critic like Spahn or Merz gets the top job, "then Merkel's chancellorship will likely be over more quickly."

What is clear is that the sharks are circling.

According to Bild daily, five CDU heavyweights have already for weeks been plotting against Merkel.

The group had planned to hold talks to get Merkel to leave if she failed to do so at her own initiative after the regional vote in the state of Hesse, said Bild, without naming its sources.

As it turned out, Merkel announced her decision to leave the political stage a day after the CDU was given a hammering during the Hesse vote.

She has said she would not put her thumb on the scale for any candidate, adding that she "will accept any democratic decision taken by my party."

- Waning power -
Merkel had enjoyed the support of Germans as a guarantor of stability and prosperity, having steered the country through financial crises and keeping Europe's biggest economy humming with unemployment striking post-reunification record lows month after month.

But her power has been on the wane since her 2015 decision to keep Germany's borders open at the height of Europe's migrant crisis, ultimately allowing in more than one million asylum seekers.

The mass arrivals left a deep rift in German society, and fuelled the rise of the far-right AfD, fundamentally redrawing the political map.

Besides the CDU internal power struggle that could determine her future, her departure could also be precipitated if her junior coalition partner, the Social Democratic Party, pulls the plug prematurely.

Plummeting support for the SPD has left the party torn internally over whether to stay in the government.

After a drubbing at two regional polls in as many weeks, the SPD has signalled it may walk away if Merkel's centre-right alliance of CDU and Bavarian allies CSU fails to meet its demands.

By September 2019, the party "will be able to see whether this government is still the right place for us", SPD chief Andrea Nahles said.