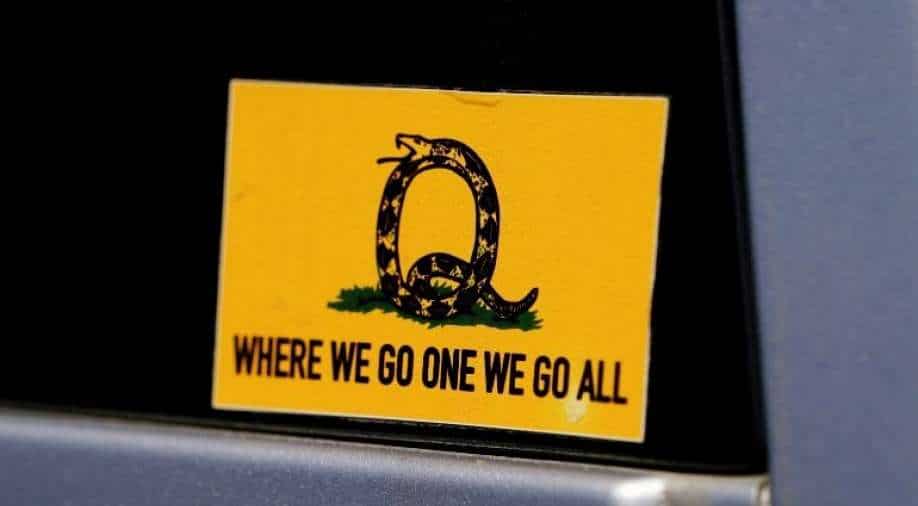 A sticker that references the QAnon slogan is seen on a truck that participated in a caravan convoy in Adairsville, Georgia, U.S. September 5, 2020. Photograph:( Reuters )

Russian government-backed social media accounts nurtured the QAnon conspiracy theory in its infancy, earlier than previously reported, according to interviews with current and former Twitter executives and archives of tweets from suspended accounts

Russian government-backed social media accounts nurtured the QAnon conspiracy theory in its infancy, earlier than previously reported, according to interviews with current and former Twitter executives and archives of tweets from suspended accounts.

Researchers said in August that the archives showed Russian accounts had helped spread QAnon in volume beginning in December 2017, https://reut.rs/2TFWoWc, but that team did not examine the history of specific QAnon promoters.

A more granular review by Reuters shows Russian accounts began amplifying the movement as it started, early in the previous month.

From November 2017 on, QAnon was the single most frequent hashtag tweeted by accounts that Twitter has since identified as Russian-backed, a Reuters analysis of the archive shows, with the term used some 17,000 times.

The archives contain more than 4,000 accounts that Twitter suspended for spreading Russian government disinformation in 2018 and 2019 but preserved for researchers.

The trove shows that some of the Russian accounts tweeted about QAnon's most important popularizer even before the anonymous figure known as Q emerged, then rewarded her with more promotion when she put videos about Q on YouTube.

Asked about support for QAnon, the Russian embassy in Washington said Moscow does not interfere in U.S. politics.

"Malicious activity in the information space contradicts the principles of Russian foreign policy, national interests and our understanding of interstate relations," a spokesman said.

A current Twitter executive said Russian accounts are not driving the present iteration of QAnon, which has expanded to include baseless claims about COVID-19 and other issues.

The original posts associated with the QAnon conspiracy theory appeared in late October 2017, purporting to be from a Trump insider with "Q" security clearance who said Hillary Clinton faced arrest and her allies were running a massive child-sex ring.

The fantasy was confined to a small piece of the internet for a few days until conservative video blogger Tracy Diaz, known online as TracyBeanz, began to post regular videos promoting it. She soon began amassing undisclosed donors and now has more than 10 million video views on YouTube.

A few Russian accounts had been retweeting Diaz as far back as April 2017, according to the archives of suspended accounts. After her first Q video on Nov. 3, the number of Russian tweets pushing Diaz' handle surged to 40 monthly through the following spring, the archives show.

Diaz did not respond to an email seeking comment.

It remains unclear how much the Russians influenced Diaz before she hit it big. But former Twitter security staffers said a handful of accounts that tweeted to Diaz from mid-2017 illustrated the extreme difficulty of detecting covert influence.

Now suspended for undisclosed reasons or abandoned by their operators, these accounts claimed to be American but displayed unusual interest in Russian issues. The visible tweets between them and Diaz were first flagged to Reuters by open-source researcher Chris Scott.

Also read: QAnon is thriving in Germany. The extreme right is delighted

One account called CrusadersPost retweeted obscure Russian officials and appeared to be the first account to use the term "Q Anon" on social media, on Nov. 2, according to people with access to all public tweets.

CrusadersPost had reached out to Diaz in April to wish her a happy birthday and offer to help her with a new project.

“YOU ROCK,” she replied. The account also encouraged Diaz to publicize MegaAnon, which preceded and resembled QAnon.

Another Diaz fan ran an account called SlicksTweetz, which the banned Russian accounts mentioned 871 times. The day of her debut Q video, Diaz publicly thanked SlicksTweetz for sharing it.

A week later, as she worked on new videos, she replied to him: “There are so many connections—that’s a good one I hadn’t seen yet :).”