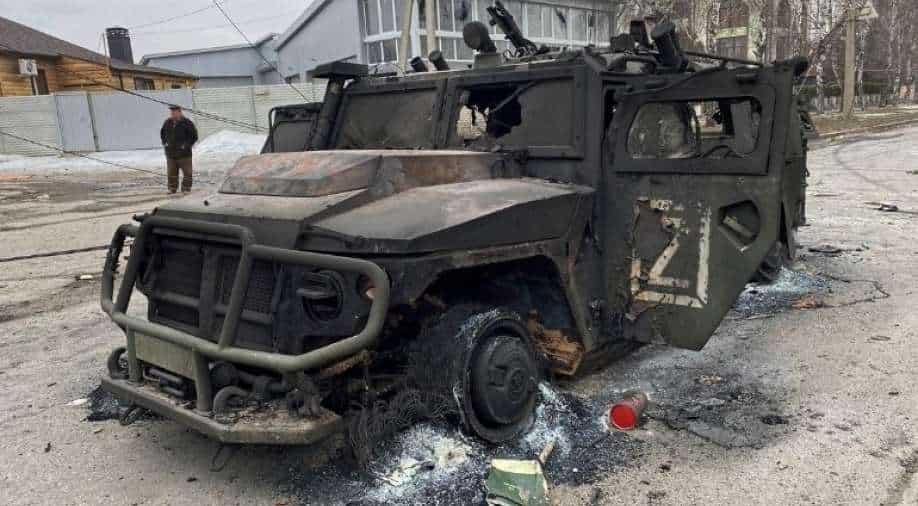 Memories of Soviet hegemony over what is now NATO’s eastern flank, imposed after the Red Army liberated the region from Nazi occupation at the end of World War II, vary from country to country depending on history, geography and convoluted domestic political struggles

Scattered around the forest in Poland like archaeological ruins, the crumbling concrete bunkers for decades stored Soviet nuclear warheads. Today, they store only memories — deeply painful for Poland, joyous for the Kremlin — of the vanished empire that President Vladimir Putin wants to rebuild, starting with his war in Ukraine.

“Nobody here trusted the Russians before and we certainly don’t trust them now,” said Mieczyslaw Zuk, a former Polish soldier who oversees the once top-secret nuclear site. The bunkers were abandoned by the Soviet military in 1990 as Moscow’s hegemony over East and Central Europe unraveled in what Putin has described as “the greatest geopolitical catastrophe of the century.”

Now Eastern European countries fear a catastrophe of their own could be in the making, as Putin seeks to turn back the clock and reclaim Russia’s lost sphere of influence, perilously close to their frontiers. Even leaders in the region who have long supported Putin are sounding the alarm.

Warnings about Moscow’s intentions, often dismissed until the Feb. 24 invasion of Ukraine as “Russophobia” by those without the experience of living in proximity to Russia, are now widely accepted as prescient. And while there has been debate about whether efforts to expand NATO into the former Soviet bloc were a provocation to Putin, his assault on Ukraine has left countries that joined the U.S.-led military alliance convinced they made the right decision.

A Russian attack on Poland or other former members of the defunct Warsaw Pact that now belong to NATO is still highly unlikely, but Putin has “made the unthinkable possible,” warned Gabrielus Landsbergis, the foreign minister of Lithuania, Poland’s neighbor to the north.

“We live in a new reality. If Putin is not stopped he will go further,” Landsbergis said. His country, bordering both Russia and its ally Belarus, has declared a state of emergency.

Prime Minister Mateusz Morawiecki of Poland gave his own warning of perhaps worse to come. “We should be under no illusions: This could be just the beginning,” he wrote in the Financial Times. “Tomorrow Latvia, Lithuania and Estonia, as well as Poland, could be next in line.”

Fear that Putin is capable of just about anything, even using nuclear weapons, is just “common sense,” said Toomas Ilves, a former president of Estonia.

Ilves announced this week on Twitter that he was “accepting apologies” for all the “patronizing nonsense from Western Europeans” who complained that “we Estonians were paranoid about Russian behavior.”

In a telephone interview, Ilves said he had not received any apologies yet but was gratified to see Russia’s “shills and useful idiots getting their comeuppance.”

Western Europeans who once scoffed at his dark view of Russia, he added, “have suddenly become East Europeans” in their fearful attitudes. “This past week marks the end of a 30-year-long error that we can all come together and sing kumbaya.”

Memories of Soviet hegemony over what is now NATO’s eastern flank — imposed after the Red Army liberated the region from Nazi occupation at the end of World War II — vary from country to country depending on history, geography and convoluted domestic political struggles.

For Poland, a nation repeatedly invaded by Russia over the centuries, they are of humiliation and oppression. Baltic states, extinguished as independent nations by Stalin in 1940 and dragooned at gunpoint into the Soviet Union, feel much the same way.

Others have fonder recollections, particularly Bulgaria, where pro-Russian sentiment has long run deep, at least until last week, and Serbia, which has for centuries seen Russia as its protector.

Putin’s war to bring Ukraine to heel, however, has united the region in alarm, with even Serbia voicing dismay. On Monday, Bulgaria’s prime minister fired his defense minister, who caused outrage by suggesting that the conflict in Ukraine should not be called a war but “a special military operation,” the Kremlin’s euphemism for its invasion.

Only Milorad Dodik, the belligerent, pro-Kremlin leader of Bosnia’s ethnic Serbian enclave, Republika Srpska, has shown any sympathy for Putin’s war, stating that Russia’s reasons for its invasion “were received with understanding.”

Outrage over Russian aggression, even in countries historically sympathetic to Moscow, has derailed years of work by Russian diplomats and intelligence operatives to cultivate allies like Ataka, an ultranationalist political party in Bulgaria that is so close to Russia that it once launched its election campaign in Moscow.

Even Hungary Prime Minister Viktor Orban, who usually delights in defying fellow European leaders and stood with Putin last month in the Kremlin, has now endorsed a raft of sanctions imposed on Russia by the European bloc. He is still blocking transport of weapons into Ukraine across Hungary’s border but has curbed his previously gushing enthusiasm for Putin.

So, too, has Milos Zeman, the previously Kremlin-friendly president of the Czech Republic. “I admit I was wrong,” Zeman said this week.

In Poland, traditionally one of the most anti-Russian countries in the region, the populist governing party, Law and Justice, has gone almost overnight from aligning itself with Moscow in its hostility to LGBTQ rights and the defense of traditional values to becoming one of Putin’s most robust critics, offering its territory for the delivery of weapons into Ukraine and taking in more than 450,000 Ukrainians who have fled the war.

Gas stations and ATMs in southeastern Poland along the border with Ukraine have been besieged in recent days by people worried that they might need to get out fast. That possibility hit home Monday evening when missiles slammed into a Ukrainian village just a few miles from the frontier, rattling windows in nearby houses on the Polish side.

Just two weeks before Russian troops poured into Ukraine, Poland’s prime minister joined Orban and Marine Le Pen, the far-right French presidential candidate who has frequently spoken up for Russia, at a meeting in Madrid focused on attacking the European Union and its liberal attitudes on immigration.

In recent days, however, Morawiecki has dropped the hostility to the European bloc to focus instead on opposing the Kremlin. He has lobbied for tough sanctions on Russia, traveling to Berlin to personally “shake Germany’s conscience” and nudge it toward a dramatic U-turn in its policy toward Russia. On a recent visit to Warsaw, Defense Secretary Lloyd Austin hailed Poland as “one of our most stalwart allies.”

On Friday, Poland hosted a summit meeting with nine regional leaders to rally opposition to Russia’s invasion and discuss ways to help Ukraine. “We have woken up to a completely new reality,” Polish President Andrzej Duda told the gathering, lamenting that it had taken a Russian invasion to interrupt “the peaceful sleep of wealthy Europeans.”

A nation of Slavs like Ukraine, Poland has long been viewed as a wayward family member by more messianic-minded Russian nationalists, whose views Putin channeled last week in his justification for the war. Russia’s foreign minister recently sneered at Poland and other new NATO members as “territories orphaned” by the collapse of the Warsaw Pact and the Soviet Union.

To demonstrate that Poland has no desire to rejoin what Moscow imagines as its happy, obedient but sadly divided family, the mayor of Warsaw announced Tuesday that refugees from Ukraine would be housed in apartment blocks built during the Cold War to house Soviet diplomats and left abandoned since because of legal disputes over ownership.

Few people expect Russia to try to bring Poles back into a Moscow-dominated Slavic “family” by force, as it is now trying to do with Ukrainians. Doing that, said Tomasz Smura, director of research at the Casimir Pulaski Foundation, a research group in Warsaw, “would mean that Putin has gone totally mad.”

At the former Soviet warhead bunker in Podborsko, northwestern Poland, Zuk said he never really expected the Russians to try to retake their lost, Soviet-era military outposts. But he still wondered why, just before pulling out of Podobsko with its nuclear weapons, the Soviet military drew up a maintenance schedule for cranes used to lift warheads and other equipment at the facility stretching years into the future.

“It seems they did not think they were leaving forever,” Zuk said, standing in a cavernous underground hall once crammed with warheads and long off limits to all but Soviet officers. In its attitude toward Poland, he added, Russia has always acted “like a master toward a servant,” a relationship that it is now trying to impose on Ukraine. “I worry that Putin may want to get hold of Poland and the Baltic states, too,” he said.