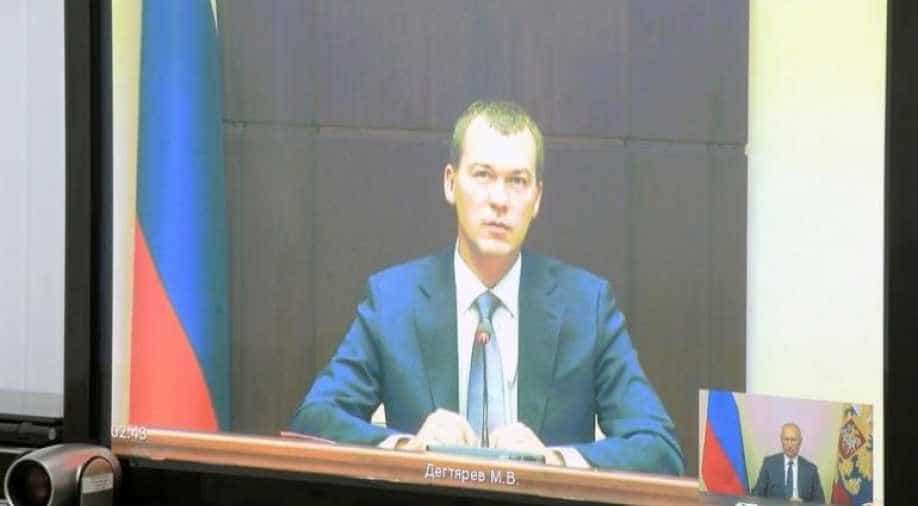 President Vladimir Putin named a new acting governor to head Russia`s Far Eastern region of Khabarovsk on Monday after the previous regional head was arrested on murder charges, sparking a wave of protests.

At least 10,000 people demonstrated in Khabarovsk on Saturday to demand Moscow release Sergei Furgal, a member of the ultra-nationalist Liberal Democratic Party (LDPR) who won election in 2018 after beating a rival from the ruling pro-Putin party.

Furgal, born in Russia`s Far East, was detained on July 9 and flown to Moscow to face charges over the murder and attempted murder of multiple businessmen 15 years ago. He denies wrongdoing.

Protests broke out soon afterwards and have continued for over a week. Their size is unusual for Russia`s regions, as is the fact that the authorities have not yet moved to break them up.

Putin on Monday formally removed Furgal from his post and appointed Mikhail Degtyaryov, 39, a lawmaker and also an LDPR member, to take over as the acting head of the region, according to a decree published on the Kremlin website.

The Kremlin has so far publicly played down the protests which have highlighted anger among some in the Far East over what they see as policies emanating from detached federal authorities located in Moscow seven time zones to the west.

The unrest also comes less than three weeks after Russians voted to back a set of sweeping reforms clearing the way for Putin to run for two more presidential terms, potentially remaining in the Kremlin until 2036 rather than stepping down in 2024.

Kremlin critic Alexei Navalny, whose allies in the region have backed the demonstrations, cast Degtyaryov as a detached Kremlin appointee whose selection he predicted would fail to appease protesters.