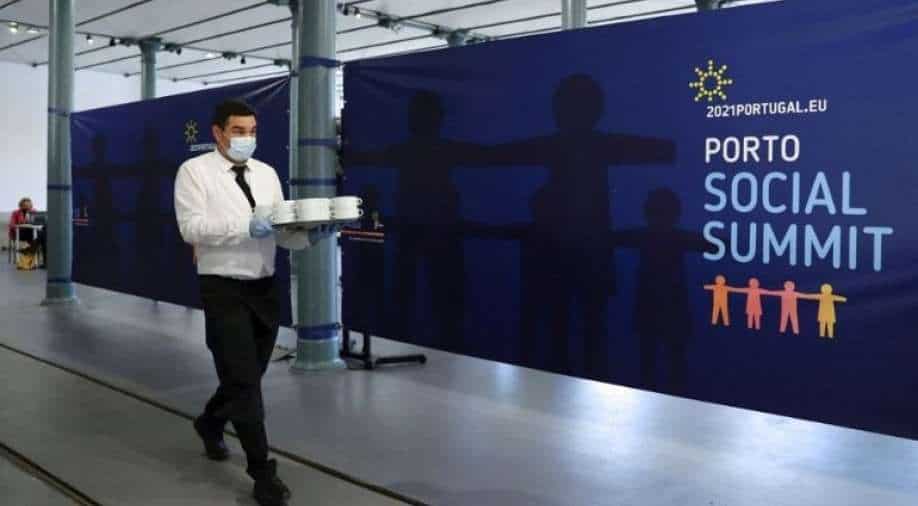 Porto Social Summit hosted by the Portuguese presidency of the Council of the European Union at the Alfandega Congress Center in Porto on May 7, 2021. Photograph:( AFP )

EU leaders meet on Friday to survey the economic wreckage of the Covid pandemic, with high hopes from summit host Portugal that they will swear off austerity and tackle poverty.

Twenty-four of the EU's 27 leaders will gather in person in the riverside city of Porto for a summit that will make social issues a priority after two historic economic crises hit Europe over the past decade.

Excusing themselves because of the pandemic, German Chancellor Angela Merkel and Dutch Prime Minister Mark Rutte will attend only by videoconference, as will Malta's premier.

This will be a disappointment to Portuguese Prime Minister Antonio Costa who wanted the so-called Social Summit to be the centrepiece of his country's six-month EU presidency and with Germany and Netherlands top on of his list to hear the anti-austerity message.

The EU's 27 member states are deeply divided on social issues. The countries of the south, such as France, Italy, Spain and Portugal, are determined to push for the protection of the economically vulnerable.

Rich northern countries, attached to their successful national models, and the eastern countries, which fear losing their competitiveness, reject going further down this route.

Nicolas Schmit, the EU's social affairs commissioner, said that the health crisis had exposed the limitations of the free market to answer all problems.

"Markets could do little against a virus," the Luxembourger told AFP in Brussels, before heading to Portugal.

"There is an ideology that advocated this, that trusted markets to solve all problems."

A lot has changed in Europe since the eurozone debt crisis, when Germany and allies imposed cost-cutting reforms on countries sinking in insolvency, in return for bailout loans.

Last year, the EU member states agreed on a massive 750 billion euro recovery plan that instead of loans relies mainly on direct payouts and will be financed by joint borrowing amongst all member states.

But Costa and like-minded leaders would like Europe to go further and create EU-wide social policies such as a minimum wage, employment schemes and set a cap on Europe's poverty level.

This wishlist, put together in something called the "social pillar", was originally drafted in 2017 at a similar summit in Sweden, a year after the populist-fuelled Brexit referendum spooked the EU.

Putting those policies into practice "is the best vaccine against inequality, fear and populism," Costa said ahead of the summit.

The official programme will start on Friday with a conference bringing together representatives of civil society, social partners and the EU chiefs Charles Michel and Ursula von der Leyen.

This will be followed by the summit, where leaders will first meet to discuss the latest developments in fighting the Covid-19 pandemic, as well as the negative turn taken in relations with Russia.

The discussion on social affairs will take place on Saturday, ahead of a video call with Indian Prime Minister Narendra Modi and with Merkel, Rutte and Malta's premier Robert Abela participating by video link.

The leaders are expected to go a step further and approve a non-binding "action plan" that was presented by Schmit, the commissioner, in March.

It sets three targets for 2030: to increase the employment rate to 78 per cent, to provide vocational training to at least 60 per cent of adults each year and to reduce the number of people at risk of poverty by 15 million.

While the leaders won't make any concrete decision, Schmit said he expected "a strong political message".