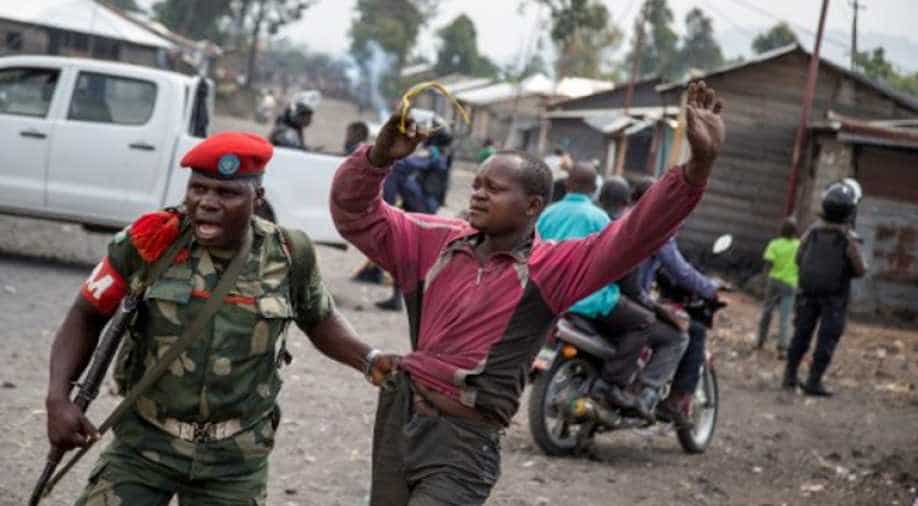 A man is arrested by a member of the military police after people attempted to block the road with rocks, in the neighbourhood of Majengo in Goma, eastern Democratic Republic of the Congo. Photograph:( AFP )

Gunfire could be heard in several districts of Kinshasa early on Tuesday as demonstrators demanded that President Joseph Kabila step down after his mandate expired at midnight, and measures to curb dissent fanned fears of more violence.

Reuters witnesses in various parts of the Democratic Republic of Congo's capital city heard repeated gunshots, and one saw youths burning tires in the street. Protesters also set off fireworks and cheered, a Reuters witness said.

Demonstrators in the districts of Kalamu, Matete and Lingwala as well as at Kinshasa University blew whistles to signal to Kabila that it was time to leave. Students at the university also burned tires, multiple witnesses said.

Kabila faces potentially one of his biggest challenges since he took power after his father was assassinated in 2001. Critics accuse him of clinging to power by letting his term run out with no election to name his successor expected until 2018.

Kabila has rarely spoken about the issue in public, but his allies say the election was delayed because of logistical and financial problems. The constitutional court has ruled that Kabila can stay on until the election takes place.

Some opposition leaders agreed Kabila can remain in office. But opponents, especially in Kinshasa, a city of 12 million, are not buying it. Diplomats have urged Kabila to step down to avoid triggering a massive crisis and possibly another civil war.

In what appeared to be an attempt at soothing opposition grievances, Kabila's administration announced on state TV an expansion of the government by 17 ministerial posts to 65, many of them reserved for opposition members.

The main opposition coalition, which refused to accept the deal enabling Kabila to stay on, is unlikely to be appeased.

Scores of protesters have been arrested in the past 24 hours, mostly in the eastern city of Goma, according to human rights groups.

Authorities have blocked most social media and outlawed protests in Kinshasa. Those measures have raised fears of more violence in a nation that has suffered near constant war and instability in the two decades since the fall of kleptocrat Mobutu Sese Seko.

Western powers are nervous of a repeat of the conflicts between 1996 to 2003 that killed millions, drew in half a dozen neighbouring armies and saw rebel fighters rape women en masse.