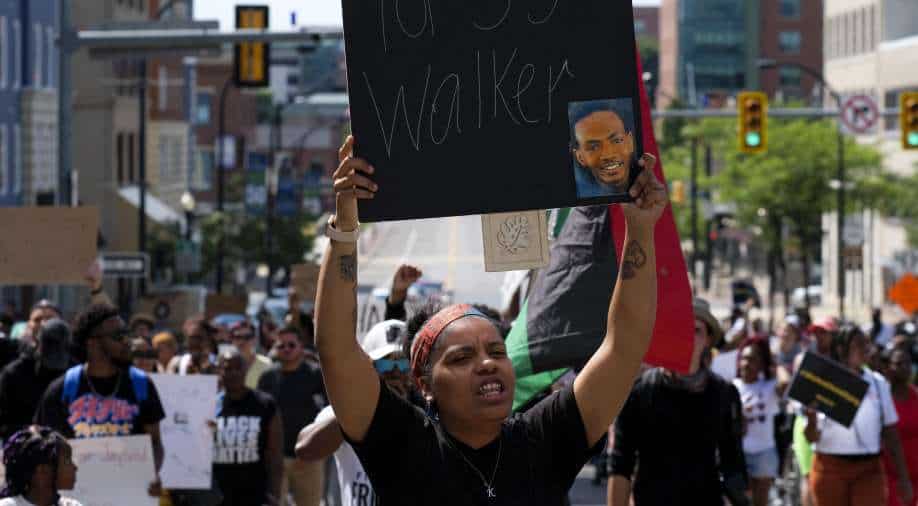 Protests have been taking place around the city since the fatal shooting of Jayland Walker last week. But Sunday’s agitation, which marked the fourth day, was the most intense following the release of the footage

Carrying “Black Lives Matter” placards, hundreds of protesters hit the streets in Ohio state’s Akron city, US, after police released the body-cam footage showing the moments leading up to the fatal police shooting of Jayland Walker, a 25-year-old Black motorist.

Protests have been taking place around the city since the fatal shooting took place last week. But Sunday’s agitation, which marked the fourth day, was the most intense following the release of the footage.

The authorities appealed for calm as a crowd marched to City Hall carrying banners with slogans such as “Justice for Jayland” and "we are done dying" reverberated throughout the streets well into the evening.

According to reports, some protesters blocked traffic in the Highland Square neighbourhood as well as West Akron.

Fearing potential unrest, authorities in the city of 190,000 people moved snowplows and other heavy equipment near the police department to serve as a barrier.

Two videos were released on Sunday—one that was a compilation of body-camera footage, body-cam still frames and voiceover, and another of the complete body-cam footage of the entire chase and shooting.

The voiceover explained that Walker did not stop and drove off. Police engaged in a car chase and said a shot had been fired from Walker's vehicle, reports AFP.

After being chased for several minutes, Walker got out of his car while it was still moving and fled on foot. Officers tried to subdue him with their tasers, but he kept running.

Several officers finally chased Walker to a parking lot. The body-cam footage is too blurry to see clearly what happens, but an initial police statement released after the shooting says he behaved in a way that caused officers to believe he posed a "deadly threat."

All of the officers at the scene opened fire on Walker, shooting multiple times in rapid succession.

He was pronounced dead at the scene.

He added that the eight officers involved in Walker's death have been placed on paid administrative leave until the investigation is complete.