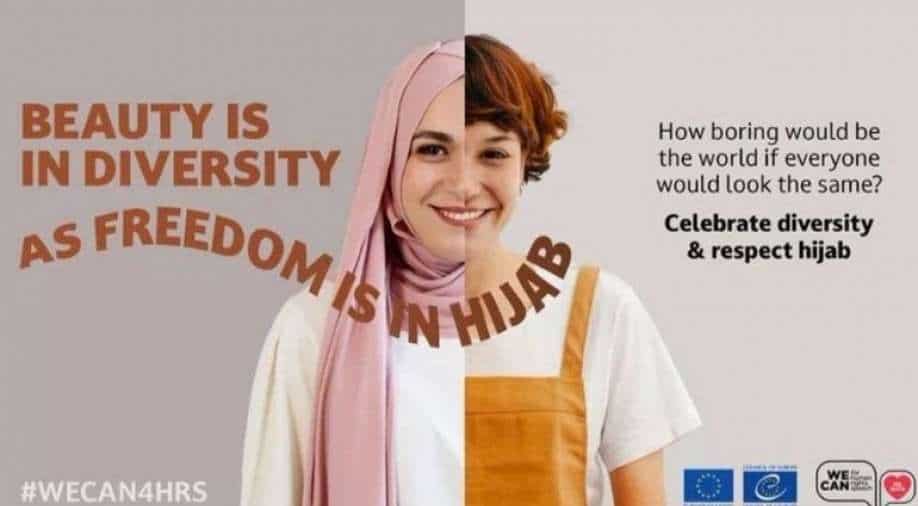 After strong opposition from France, a European campaign promoting the 'joy and freedom' of wearing the hijab was cancelled.

The campaign by the Council of Europe was slammed by President Macron's government as highly inappropriate, left-wing lawmakers criticised it, and right-wing presidential hopefuls blasted it as Islamist propaganda.

The council's anti-discrimination division, which launched the diversity campaign, has taken its content down from social media, saying it will "consider a better presentation of this initiative."

The sentiments concerning the hijab, according to Marija Pejcinovic Buric, "reflected individual statements made by participants in one of the project's workshops and do not represent the stance of the Council of Europe."

The European Union-funded web campaign was launched last week in Strasbourg, but it struck a chord in France, notably among right-wing leaders.

Tweeted photographs showed two happy young women's portraits cut in half and fused together to show one with exposed hair and the other with the headscarf.

One of the posters said, "Beauty is in variety, just as freedom is in hijab."

"Can you imagine how dull it would be if everyone looked alike?"

It went on to say, "Celebrate diversity while also respecting the hijab."

"Beauty is in diversity
As freedom is in hijab"

You have an idea about "EU values" now. pic.twitter.com/TYaORsXo2u

Anti-immigration far-right candidates in France are seizing on the campaign to remove President Macron in next year's election, and they are vehemently opposed to hijab-wearing in public.

“This European campaign promoting the Islamist veil is scandalous and indecent at a time when millions of women courageously fight against this enslavement,” added far-right leader Marine Le Pen.

In France, wearing the hijab (a Muslim headscarf) is lawful, however it is not permitted in many public locations, such as schools and government offices.

In all public areas, the full-face Muslim veil is prohibited.