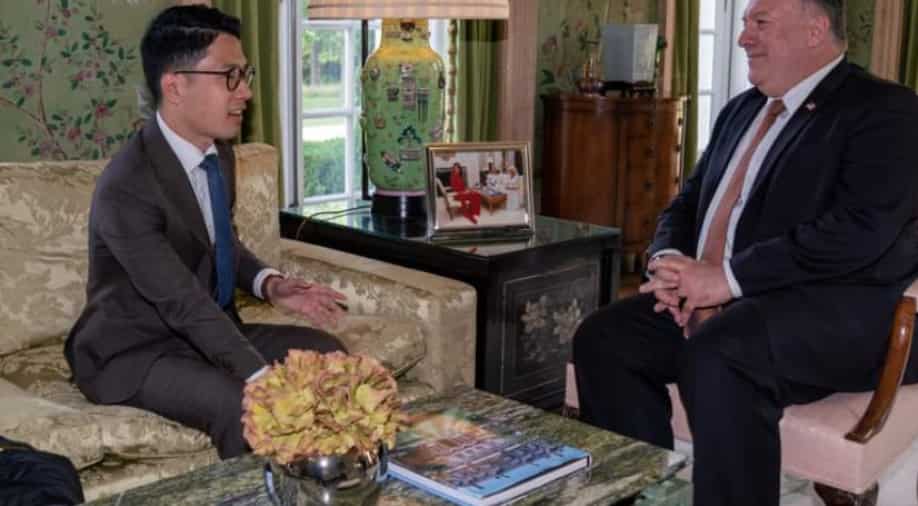 "There will be more and more individuals that will be sanctioned. There will be second wave and third wave. Tension between China and US will rise. So, this is just the start of the whole disciplinary actions," Law said in an exclusive conversation with WION.

Pro-democracy activist Nathan Law has hailed US decision of imposing sanctions against Hong Kong’s leader Carrie Lam and ten other officials for their role in curtailing political freedoms in the territory.

"There will be more and more individuals that will be sanctioned. There will be second wave and third wave. Tension between China and US will rise. So, this is just the start of the whole disciplinary actions," Law said in an exclusive conversation with WION.

Law said that the whole Hong Kong government was working under the Chinese Communist Party. He vowed to pursue the fight for democracy and raising voice for legitimate demand.

Also read | US imposes sanctions on Hong Kong's Lam, other officials over crackdown

Law said he had a "very constructive" meeting with Secretary of State Mike Pompeo, as it sent "a very strong signal to the public that the US and the global Community would stay very focused on Hong Kong Affairs and human rights violation of China."

Law was a leader of the 2014 Occupy Central demonstrations, also known as the Umbrella Movement, which called for a freely elected government in Hong Kong. He was elected two years later to the city's legislature but then ousted with five others judged to have taken their oaths of office improperly.

Asked about how he thinks he can drive this ongoing evolution by becoming a voice outside his homeland, Law said, "The international front to the movement is so important because by having more International support from the government and from the people, we put more pressure on the Chinese government and hope for compassion and result of the movement."

Nathan Law is among the 24 charged over roles in banned June 4 Tiananmen Square vigil. He brushed off the facts that the majority of the Hong Kongers believe that the elections should have been postponed.

"If you look into a more credible data,  then more than half of the respondents, do not agree that the elections should be postponed and only around 15 per cent of them agreed."

Fearing persecution under the new legislation, Law fled Hong Kong for London in early July, leaving behind family and friends.

When asked if he plans to return his homeland, Law thinks it is a distant goal for him as he may be "immediately arrested".

Last month, Carrie Lam postponed a Sept. 6 election to Hong Kong's legislature by a year because of a rise in coronavirus cases, dealing a blow to the pro-democracy opposition that had hoped to make huge gains.

The United States condemned the action, saying it was the latest example of Beijing undermining democracy in the Chinese-ruled territory.